Laura Kim and Fernando Garcia's gutsy double show underscored how hard it is to design two labels at once.

Laura Kim and Fernando Garcia's gutsy double show underscored how hard it is to design two labels at once.

NEW YORK, United States — It’s impossible to separate Monse from Oscar de la Renta this season. Laura Kim and Fernando Garcia, former protégées of the late Mr de la Renta, now lead both brands. Just under two years ago, they left the American fashion house to start their own label. And in between stints at Oscar, there was plenty of sewing room drama. Monse was an instant red carpet and retail hit, but a spell working for rival fashion house Carolina Herrera ended badly, and with a lawsuit.

It’s all over now. Kim and Garcia have returned to what they consider home, with financial backing for Monse coming from ODLR. In a daring move, Kim, Garcia and Oscar de la Renta chief executive Alex Bolen made the decision to show the collections back-to-back, without a break, during a single runway show. That amounted to 81 looks in a row, making it next to impossible for buyers, editors and clients not to do a side-by-side comparison of the two.

On Monday night, the designers showed at IMG’s Skylight Clarkson Square venue, with tiered seating that felt more traditional, like a “real fashion show”, than the two-row loft spaces that seem to be generally preferred these days. You could feel the anticipation in the room, perhaps for only the second and last time this season. 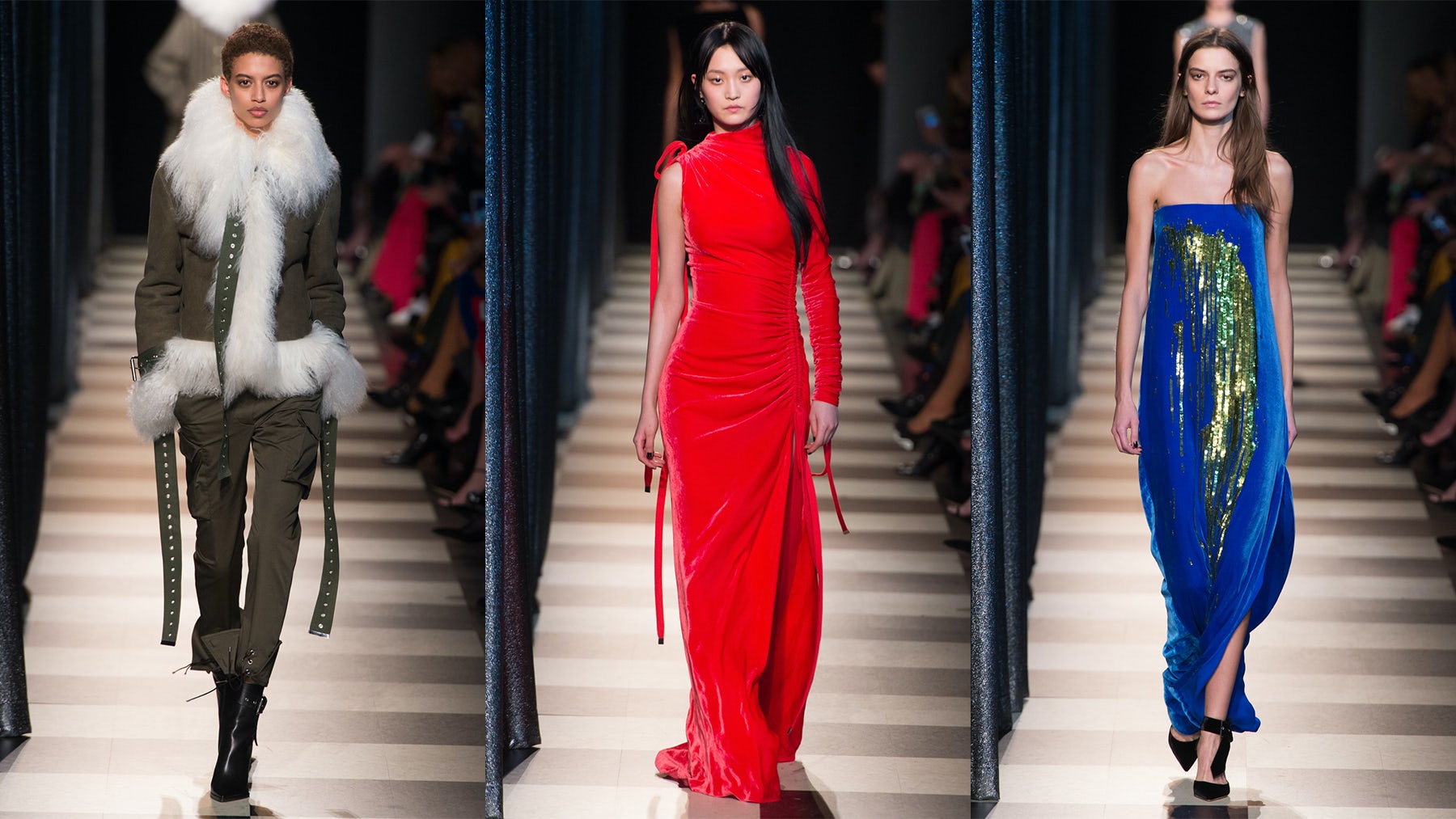 Kim and Garcia hit the ground running with Monse, showing the still-nascent label’s most authoritative collection to date. They continued to drive home the ideas they want the label to be known for — deconstructed shirting, military details, dripping sequins — and amped them up. And then there was the velvet! Cobalt blue sweatpants cinched at the ankle; a cherry red gown ruched by the pull of a sporty drawstring. They felt charged, a little kinky, but restrained enough not to veer into hooker territory. Even the more flamboyant details — plackets of ruffles traveling around a blouse, or grommet-studded belts tied at the wrists like streamers — were sharply utilised.

What Monse avoided, however, was delivering a diffused version of the grand finale. Of course, it was only right that Kim and Garcia’s debut Oscar de la Renta collection be the closer. The middle act, unfortunately, was a mishap that prevented Lurex curtains from opening on the Stefan Beckman-designed checkerboard set right before the first Oscar-clad model hit the runway. It was not a small snafu, and zapped the energy.

What followed was an homage to the late designer that at times was wracked with naïveté. They aimed to honour the opulence of De la Renta’s work in the clusters of red-beaded flowers embroidered onto a bustier built out of a silver jacquard covered in red poppies, or the strapless bubble-skirt mini dress that was hand woven, row by row, out of a sunset-orange metal yarn. 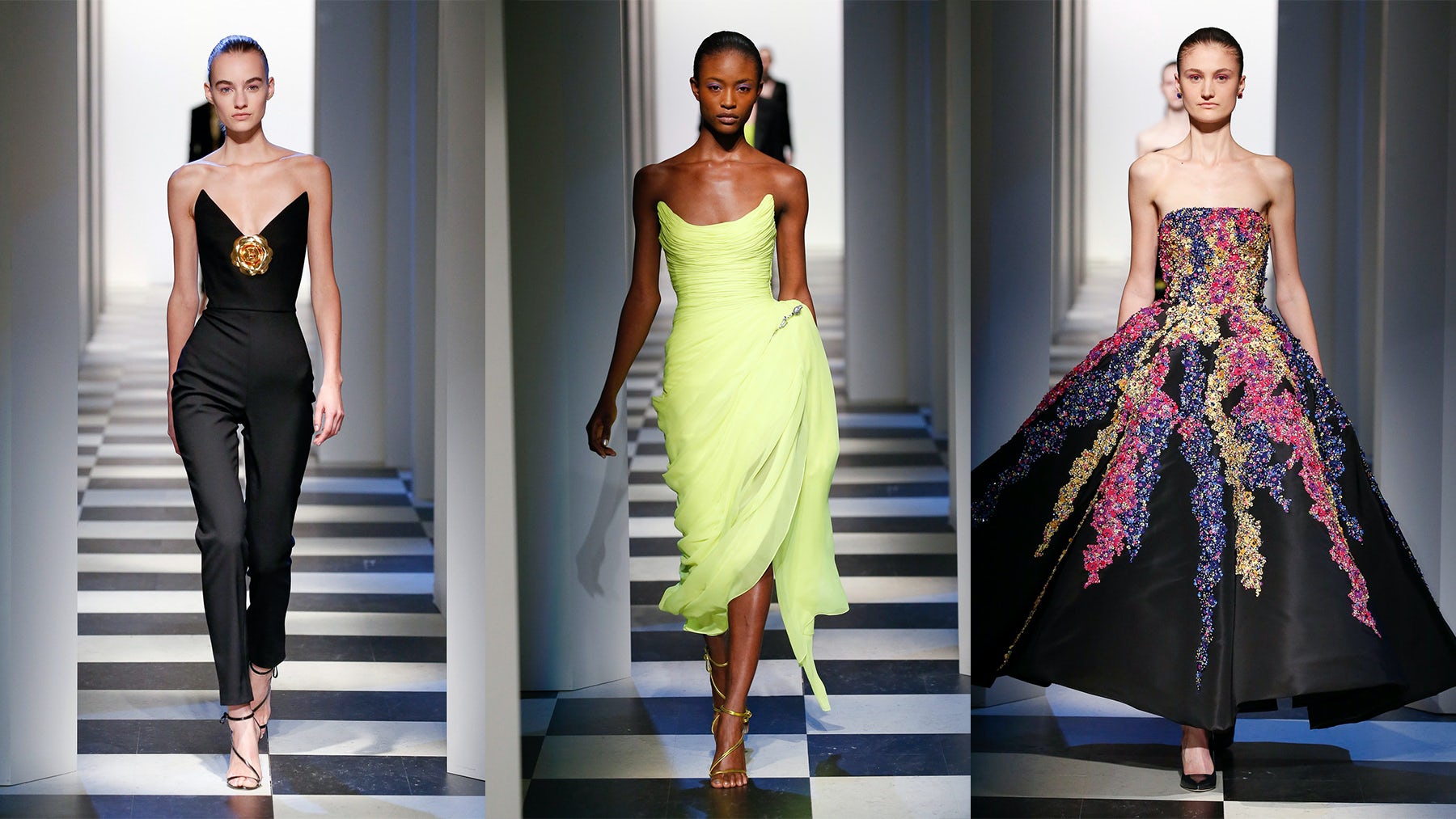 Shapes were voluminous but controlled: cocoon backs bounced off of spongy wool cashmere coats, while extra-wide skirts on strapless gowns — which landed a few inches above the floor instead of grazing it — brought the drama. As did a series of black velvet gowns. There was one column with a snake of crystals slithering up the side and another, sweeter version, decorated with bright yellow buds.

But there was an issue with fit, especially on the back of several dresses, which sort of bunched in places that they weren't supposed to.

Suiting was another miss: the textured wool crepe, saturated with colour, had a charm, but the traditional wool gabardine felt too standard. One model wiggled uncomfortably, adjusting her blazer. The too-high heels, which made it difficult for the models to walk with confidence, made everything look just that more naïve.

But what Kim and Garcia did manage to pull off here was what will likely be a commercially viable collection that sincerely honoured the man to whom they owe quite a bit, if not everything.

If we're keeping a scorecard — and the arrangement called for as much — Monse was the clear winner. One thing all of their work shares is a bold sense of colour, inherited from their longtime mentor. What sets Kim and Garcia apart, though, is that they design not in airy brights as their predecessor did, but in neon lights. Their flashy finale — models in Monse and Oscar de la Renta passing each other by in opposite directions — indicated that they're ready to take on what will continue to be a challenging balancing act.