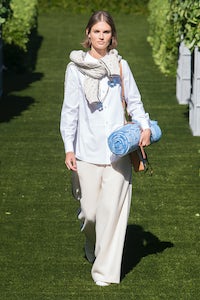 NEW YORK, United States — “He’s been my inspiration from Day One,” said Tory Burch of David Hicks, the English interior designer whose work shaped the tastes of a generation in the 60s and 70s. For her new collection, Hicks’s son Ashley allowed Burch access to his father’s scrapbooks, the first time that’s happened.

“It was a real collaboration,” she enthused. She even got to reprint some pages in the booklet that awaited guests as they arrived at Friday morning’s venue, the courtyard of the Smithsonian Design Museum, grassed over as a mark of Hicks’s added kudos as a designer of gardens. (The “grass” was greenest astroturf, which would probably have flipped Hicks’s famously snobby wig.)

He was famous for his bold colours, his geometric patterns, his mix of classic and modern. It was a vocabulary which loaned itself well to the clean, unfussy lines of Burch’s collection. Bold stripes and the distinctive hexagonal patterns that were a Hicks motif sparked languid t-shirt dresses, tunic tops and long skirts.

She claimed she liked the risks Hicks took with colour, but as risky as she got was a slip dress in a gold silk satin with skyblue pockets trimmed in bronze lace. Otherwise, Burch’s colours were fresh and bright, particularly the greens, yellows and oranges illuminated by pristine white as a contrast.

It felt like a particularly summery collection, an impression that was amplified by all the terry cloth pieces, the rolled towels the models carried and the lounginess of caftans. A couple of dresses were paved in translucent sequins, creating the impression of sun shimmering on water. That subtle, seductive effect clinched the deal: you wanted to be there, poolside, on deck, wherever it was that Tory was.