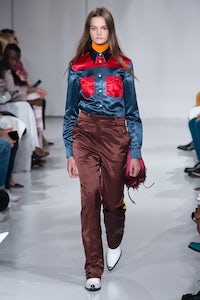 NEW YORK, United States — In Raf Simons’s eyes, his new collection for Calvin Klein was the second installment of a trilogy. Or maybe not. “It might be seven,” he admitted backstage. Whatever, this latest body of work was a clear extension of the American iconography — cowboys and cheerleaders, Hollywood and Wall Street — Simons explored last season. Then, he was a new arrival in the US. Now, he’s had some time to acclimate. His vision has significantly, thrillingly darkened. “The way America wants it to be, ‘It’s going to be amazing’, I don’t think it’s all so great now,” he said ruefully. “But we can also reverse that.”

For all that suggestion of optimism, Simons and his right hand Pieter Mulier built the collection on beauty and horror, a dichotomy that is as irresistible today as it was when Alexander McQueen made it the foundation of his fashion career. Sterling Ruby delivered another evocative set. Dangling from the ceiling were college marching band fringes and cheerleaders’ pompoms writ ultra-large in bright patriotic colours. Anchoring each of them were axes, swaying ominously over the heads of the audience. Axes! Paul Bunyan! Lizzie Borden! And — the threat of horror in the cheerleading squad — Carrie!

Whether it was deliberate or not, Simons nailed the lethal anxiety at the heart of the American dream, a self-doubt that inevitably stemmed from its foundation on genocide and slavery. Dream effortlessly turned nightmare in the hands of America’s poets laureate of terminal unease — Alfred Hitchcock, Andy Warhol, Stephen King and David Lynch — and Simons drew on them all in one way or another. The ladylike precision of Hitchcock blondes resonated in mid-century silhouettes. Images from Warhol’s "Death and Disaster" series were printed on virginal cotton smocks, a particularly unsettling contrast. Menswear was either tailored suiting, or rough and ready, a duality that echoed Agent Cooper’s psychic split in the recent re-iteration of "Twin Peaks." Coop’s evil doppelganger Mister C would look just fine in Calvin’s new denims paired with the cowboy boots that carried over from last season. But so would Randall Flagg, the monster at the heart of Stephen King’s masterpiece "The Stand."

While he was prepared to acknowledge all these references, Simons insisted they’d all been abstracted into a general gumbo of Americana, one whose ingredients included Norman Norell and Pauline Trigere as much as Amish quilts and "Smells Like Teen Spirit" pompoms. And, with the breathlessly-awaited remake of Stephen King’s "It" about to open cross-country on Friday, there was even wit (unwitting?) in the fringed bag that was the spitting image of Cousin It from "The Addams Family."

But there was an undeniable dissonance in the collection, and that placed it right at the heart of things now. The duality inherent in the bifurcated colour schemes, the crazy mounds of fringing, the couture-ish pieces cut from nylon tent fabric brutishly stamped with seals of mass production, the denims besmirched by a paint roller, Michel Gaubert’s soundtrack masterfully skittering from "American Beauty" to "It": it was all about a world going wrong. And it was brilliant.