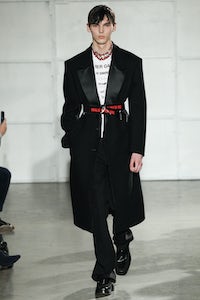 NEW YORK, United States — The envelope of the jumbo-sized Raf Simons Autumn/Winter 2017 show invite was sealed with black duct tape, with the words “Walk With Me” printed neatly in red caps. An easy directive for his audience to follow. To say that Simons is a god among New York menswear geeks would not be hyperbole, and to have him showing his collection here — for him to deem New York worthy — feels substantial, his endorsement of the city working to further legitimise its entire men’s fashion industry.

What Simons meant by those words, which re-appeared, along with dozens of others — ”Any Way Out of This,” “I ♡ You” — printed on duct-tape belts, across a white t-shirt, or on the flap of a back pocket, is up for interpretation. “I like, a lot, to say things that can be seen in different ways,” he said post-show, standing in the Gagosian on 21st Street in the middle of a large cluster of reporters. “...I think when you have a voice and you want to have a voice, you cannot just kind of walk around and do your thing. When you have a voice, you should use it.”

When you have a voice, you should use it.

It’s clear that Simons feels compelled, perhaps more than ever, to say what he thinks. He designs with an open heart. In fact, he was in the midst of conceiving the collection, a love letter of sorts to New York City — which, as the chief creative officer of Calvin Klein, he now calls home — when Donald J. Trump was elected President of the United States. “While we were working on it, something happened that you would not even imagine,” he said. “You can only speak up, I think, and bring a kind of energy and things that stand against it. I think that’s my challenge now.”

He aimed to create a new sort of punk uniform, wrapping the “lowest materialisation” — duct tape — around a traditional, elegant satin crombie coat. Black duct tape was used to make pintucks on the back a pair of trousers, and yellow duct tape was screen-printed with buildings from the New York skyline. Long before the reality of Trump set in, Simons was thinking of what it’s like to visit New York for the first time. The childlike naivete of that experience was knitted into a droopy “I ♡ You” sweater slung over one shoulder, contrasting against the gorgeous grown-up garments, like a wide-shoulder lavender blazer in a windowpane check or a black topcoat with exaggerated satin lapels.

There were no photographic images, which in some ways, gave the words more weight. “I think in general it’s important to behave fearlessly... “ he said. “Not only in a political context. But in fashion and art and architecture and writing, you should be more fearless. You should not all try to behave like people are expecting you to behave or not behave like everybody is behaving.”

Ambiant pop group Cigarettes After Sex’s cover of REO Speedwagon’s “Keep on Loving You” swelled with the finale. The clothes, too, pulled at the heartstrings in a touching, meaningful way. Perhaps Simons' overture will inspire his rabid fan base to do more, to be punk, to resist: “I think we will all have to activate.”