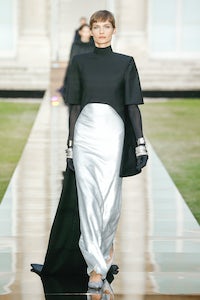 PARIS, France — In the recent history of designers assuming the mantle at august old couture houses, reverence for the founding personage hasn’t been such a thing. But in the past two weeks, we’ve seen Kim Jones debuting a menswear collection at Dior that was saturated in the everythingness of Christian himself, and now comes a couture collection for Givenchy from Clare Waight Keller that placed Hubert de G front row and centre. It was inevitable he’d be on her mind. He died a mere three months ago at the stately age of 91. But Waight Keller was also in the rare position of being the only inheritor of the mantle who’d actually taken the time to meet The Man and heed his advice: “Be strong.” And she did indeed feel strongly that his legacy needed to be celebrated.

That was the chink in the armour of the collection she showed on Sunday night in the elegantly rigorous surroundings of the gardens of the Archives Nationales. Though it was ravishing in its craftsmanship, a surfeit of respect diluted the emotional oomph of Waight Keller’s couture debut for Givenchy in January. Maybe it was as simple as too much him, not enough her. Right down to a finale that soundtracked Givenchy’s most famous client Audrey Hepburn crooning “Moon River,” the theme from her most famous film.

True, there have been times in the house of Givenchy’s occasionally sketchy meander through various creative directorships when you prayed for a shot of Audrey, and Waight Keller has already proved herself the woman who can deliver such refreshment. But however present she may have been in other ways, Hepburn’s chic, skittish levity was absent on Sunday. That was mostly due to the fact that Waight Keller’s dives into the archive had uncovered lesser-known aspects of the Givenchy heritage. Like his use of metal, for instance. A silver neckpiece dominated the patrician pairing of tan trench coat and long, pleated dress. Other bodies were bound by bands of metal. Richly textured feathers were another feature, extraordinarily crafted, but not as light as you might expect.

In fact, a literal heaviness weighed the collection. There were so many capes, and trains too, like a re-vision of a hyper-formal golden age of couture (maybe just before the moment when Cristobal Balenciaga, on the brink of closing his own house, took his key clients by the hand and led them across the street to his star pupil, Hubert de Givenchy). In the midst of that, a pure, columnar tuxedo dress – silver at its exposed throat – had a fiercely sensual discipline.

The most inspiring aspect of Waight Keller’s tenure so far has been her kid-in-a-candy-store glee at the atelier she has access to. She seconded that emotion when two dozen artisans trooped out onstage at show’s end. The best is surely yet to come.