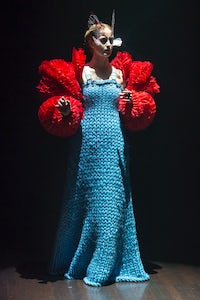 PARIS, France — Photos can capture an important part of the story — the scale, the imagination, the complexity of the clothes — but they don’t have a hope in hell of communicating just how sublime Jun Takahaski’s presentation for Undercover was.

Making an effort to look at the runway images through the eyes of someone who wasn’t there, I appreciate there’s something of a shortfall between reality and record. Which means my fanboy overdrive comes down to one simple, irrefutable fact. You had to be there: to experience the eerie choreography and lighting; to absorb Thom Yorke’s thrilling soundtrack (torrents of abstract sound, steadily cohering into pulsating rhythm); to feel like you were suspended inside the belly of a new life form.

In a way, that’s what it was, in Takahashi’s terms at least. He called his collection Utopie. Subtitle: A New Race Living in Utopia. After the show,  mind still reeling, I asked him if he believed such an ideal could come to pass. “I hope so,” he answered.

Hope: that was the cloud on which the collection floated by, dreamlike. This entire season has been recast with a political tint, courtesy of the populist upheaval in America and Europe. Takahashi’s futurist Utopia was curiously reliant on a distinctly old world order, a hierarchy whose ten archetypes were listed in the shownotes, among them, Aristocrats, Soldiers, Young Rebels, Agitators, and, finally, Monarchy, this last notion represented by a Red Queen, straight out of a sci-fi Wonderland. Part Princess Leia, part Christmas tree ornament.

The thought did cross my mind that Takahashi might have been endorsing hierarchical security — class system bordering on authoritarianism — as an escape from the dangerously inchoate state of global politics, but then, he did incorporate anti-Establishment archetypes into his cast of characters. And, putting them all together, he had a delicious slew of inspirations for another of his ravishing takedowns of fashion orthodoxy, from the floor-length knit dresses which opened the show, through romantic deconstructions of military jackets and sensational studded sweatshirts, to spectacular knitwear, quilted parkas and insectoid black urbanwear, and finally, the Red Queen.

The details were mindboggling, especially the belts worn by the Agitators, laden with keys, scissors, knives, bits and pieces of threatening hardware.  Not an accessory designed with modern travel in mind.

But that was another wondrous thing about the collection. Takahashi is a cultural archeologist almost without equal, dedicating an entire collection to, say, New York musical legends Television, or the jazz pianist Bill Evans, or Hieronymus Bosch. The references weren’t specific here, but there was an optimistic feeling for an alternate reality where all times and places coincided, and where all things were equal, distant past as relevant as far future. Utopia, I guess, though the way the Salle Wagram was configured for the show, with huge red velvet curtains opening and closing after each vignette, did remind me of the Red Room in Twin Peaks, pop culture’s ultimate alternate reality.

Takahashi featured a golden bee on his invitation. You could say it was a Lynch-ian synchronicity that the same insect was embossed on the invitation for the Dior show, two hours earlier. Given fashion’s occasionally uncanny ability to not just reflect a mood, but also project what might be upcoming in the hive mind, the symbology of the golden bee is worth a look.  I’m holding out for Golden Bee Number Three. Then we’ll have a trend.