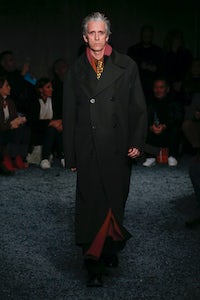 MILAN, Italy — You entered the dreamy alt-reality that Francesco Risso created for Marni on Saturday afternoon through a reality that was very much now: anti-fur demonstrators (Marni was a house built on fur), hands dipped in red paint, throwing smoke bombs, chanting, jeering. On the surface, it was a world violently different from the ones Risso had in mind, the journey he was imagining through a landscape of peculiar experiences: “Everest,” he said, “and a lost campfire, a dangerous tunnel in a city, or even your bed…” That made no sense.

Still, you were drawn to the inescapable conclusion. Risso was motivated by the same spirit of anarchy and idealism that inspired the protestors outside his show. His soundtrackist, the ever-sensitive Frédéric Sanchez, certainly seemed to think so. The music he provided ran a gamut from anarchic gabba to Bowie’s hippie hymn Memory of a Free Festival. Full marks to the seating arrangements as well. Old TV sets, bags of flour, bird cages, cardboard boxes and drawers were repurposed as places to park your bum. I sat on an upturned pot. Marni mainman Renzo Rosso was wedged into an old dodgem car.

That creative repurposing seems pretty typical of Risso’s outlook on life. “I want to live my whole life thinking as a child thinks,” he claimed after the show. The innocence of a child’s perceptions, the seriousness of a child at play: these were the linchpins of his collection because, for him, they embodied intuition. “And intuition is the new black.”

There was some old black in the collection, some voluminous suits with baggy pants and jackets tied back. They had the feel of grownup clothes found by kids in a dress-up box. So did all the other oversized stuff. Even the couple of models who were themselves advanced in years felt like they were wearing the castoffs of another time, another culture. The red silk chinoiserie bed jacket over the striped Waldo top, the clownish multicoloured windowpane-checks, the huge nomadic blankets dressed a cast of characters out of a skewed fairytale. “Someday my prince will come,” Snow White warbled on the soundtrack.

But there was a seriousness not just of play but of purpose in Risso’s collection. He pointed out that divertire, which means “to have fun” in Italian, also means “to change direction.” And that’s what he is doing to Marni.