A Mesh of the Personal and Political at Dior

It was Maria Grazia Chiuri's most animated and appealing collection so far, liberated by the connections between the upheaval of 1968 and the agitators driving change today. 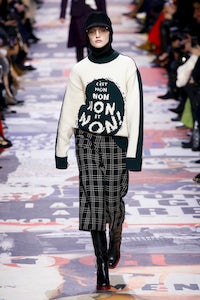 A Mesh of the Personal and Political at Dior

It was Maria Grazia Chiuri's most animated and appealing collection so far, liberated by the connections between the upheaval of 1968 and the agitators driving change today.

PARIS, France — Maria Grazia Chiuri says her kids have been hounding her about why her generation was asleep at the wheel while a perfect storm of social, economic and environmental problems took shape to plague the planet. One way to get woke. Now Chiuri believes a luxury brand should represent not just the quality and the value that accrue from timeless craftsmanship, but also ethical value.

And so her new collection for Dior came together in a mesh of the personal and the political. She was riveted by a museum show about 1968, a year of massive global upheaval, for better and for worse, much of it driven by a young generation’s desire for change. In Paris, the student riots in May ’68 initiated a social revolution that transformed France. Chiuri was curious about fashion’s response. At the time, YSL said, “Recent political events make haute couture a relic.” Cristobal Balenciaga saw the writing on the wall for his world. He locked his doors and walked away. Dior’s Marc Bohan had already recognised the importance of youth culture, the importance of inclusivity by launching Miss Dior in 1967. Vogue editor Diana Vreeland’s descriptive “youthquake” was a perfect summation.

It certainly registered with Chiuri, who was busy finding all sorts of parallels between then and now: young innovators driving change, or at least agitating for it. (She’s hardly alone: the Oxford Dictionaries made “youthquake” the word of 2017.) Making that connection seemed to liberate her creatively. The Dior collection she showed on Tuesday afternoon was her most animated and appealing so far, from Ruth Bell stomping out in windowpane-checked culottes and a sweater yelling NO! to Adwoa Aboah closing the show sixty looks later in flower power organza anchored with a big D belt and bike boots. In between, there were plenty of visions that evoked the spirit of ’68: the peace symbol sweater, the kilts and matching jackets (college girls on the barricades), the shearlings and serious Left Bank black leather, the fabulous patchworked velvets, the less fabulous patchworked denims. And then there was this whole other strand of personal stuff.

It’s been Chiuri’s way at Dior to wear her recent research on her sleeve, or at least her t-shirt. There was a bit of that in the trappings of the show – the vaguely Situationist/sloganeering visuals of the set, in particular — but the overriding impression was of Chiuri being truer to herself than ever, weaving her Pugliese roots, with their strong tradition of women’s crafts, into her new Parisian context. “embroidery is part of my culture,” she said, “but since I arrived at Dior, not so much.” She made up for that on Tuesday with not just embroidery, but crochet, patchwork, lace and fringing, all the hand-making that reminded her of her grandmother. “Of course, it’s a bit more technological, but we’ve maintained the idea of the human touch.”

Maybe it looked a little more fragile than the other, tougher, more tomboy-ish outfits, but on Chiuri’s moodboard was the cover of “The Subversive Stitch," feminist writer Rozsika Parker’s 1988 book about “embroidery and the making of the feminine." The designer mentioned artists in fabric Louise Bourgeois and Tracey Emin, and waxed lyrical about the little “laboratories” all over the Salento region in Puglia where women are creating small runs of artisanal luxury products. “It’s incredible what you can find,” Chiuri enthused. Maybe even the future, if you look hard enough.