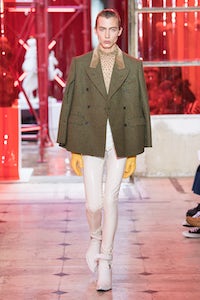 PARIS, France — John Galliano accompanied his latest men’s collection for Maison Margiela with a remarkable podcast. One moment alone makes it worth a listen. Galliano is talking about the way satin-backed crepe, his favourite fabric, reacts to body heat, how it moulds to the torso. “Like mercurial oil,” he murmurs, relishing every single syllable as though it was a pearl of caviar. A subtle electronic effect spins his words, giving them a slightly discombobulating echo. It’s aural opium.

In the same unhinging way, Galliano accessorized his presentation with four sculptural works by American artist Tony Matelli. Classical sculptures, ruined by time, dressed with pieces of fresh fruit, mangoes, strawberries, wedges of citrus. Except that these most transient elements were rendered in bronze, the most artful trompe l’oeil I’ve ever seen. What seemed eternal was not, what seemed momentary was eternal. Let me quote from the notes: “Such counterintuitive juxtapositions force the viewer to consider how ripeness and decay, the sacred and the profane and the immutable and the temporary can all co-exist within a single moment.”

Welcome to John Galliano’s latest production. It’s taken me a few days to write about it. That’s because it rewarded reflection. A few retailers have mentioned that their most adventurous customers are looking beyond sportswear to something exquisite: hyper-tailoring, dress shoes! When dads are wearing Triple S, a boy’s thoughts turn to finer things. That’s the way the fashion pendulum inexorably swings.

Galliano never lost faith in errant finery. If any designer could infuse menswear with the surreal spirit of the Marchesa Casati, it would be John. The Margiela collection he showed on Friday was Artisanal. In other words, it was the house’s version of couture for men. Not bespoke but the highest form of dressmaking – for men. Couture and bespoke share a fundamental principle. They are defined by cut. Since his “Fallen Angels” collection in 1986, that has always meant cutting cloth on the bias for Galliano. It creates a slippery diagonal movement across the body. “A natural elasticity,” he called it in his podcast. Though it’s conventionally applicable to silky, satiny womenswear fabrics, the designer decided that its sensuality and loucheness made natural elasticity “the most modern thing a guy could wear." So there it was, in a check wool suit, a literal twist on Savile Row tradition. And another suit in glamorous white satin, a male take on Marlene Dietrich.

Elasticity was also the motivator behind the sheer silk knits that encased bodies like saran wrap, a delicate restraint that, in its defiance of conventional maleness, indicated the “new masculinity” that Galliano lodged at the heart of his collection. Here, the sensuality felt more fragile. But in a typically unpredictable gesture, he counteracted any hint of that with the vinyl trousers and the gilded, heeled boots that accompanied most looks. Reminders of the New York Dolls when Malcom McLaren was playing their Svengali. The Dolls represented a “new masculinity” in their early 70s heyday (even if it was, in truth, riddled with rampant testosterone). So did David Bowie, with whom Galliano shares an ability to span time and space – and an interest in Japonisme.

The repurposing of vintage kimonos was one of this remarkable collection’s more remarkable facets. As a mac, as a jumpsuit, and, most subtle and seductive of all, as the lining of a black mohair coat. Galliano designed his jackets and coats to be draped casually over shoulders, cape-like. “A shrug, a memory of a shoulder line and a shoulder-pad,” he said in his podcast. Such a gorgeous notion, a flicker of substance, passing like time. “The cut was inspired by the way we sometimes dress in haste.”

That idea is, of course, one of the tentpoles of Galliano’s women’s collections for Maison Margiela. But, on some other level, it may be the way he acknowledges the immediacy of the street, even as his designs elevate – and ultimately supplant — it with their perverse idiosyncrasy. Fierce individuality is the flag we fly in the face of a world pitching once more to populist conformity. So why not take to the streets in Galliano’s thigh-high rubber waders?