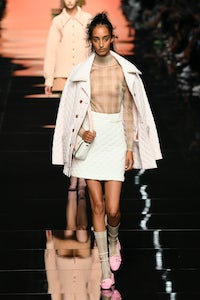 MILAN, Italy — A sun rose at the back of the catwalk, and its glow set the tone for a Fendi show that was saturated with warmth. For the first time in memory, there was no elevated catwalk. The models walked at the audience’s level. Funny how a detail like that makes a show more human. Silvia Venturini Fendi talked about the quality of “Romanity” in a pre-show conversation. Rome + humanity? That made sense. The city’s relaxed, hedonistic quality blended with the casual, sensual mood of the clothes.

This was Silvia’s first solo flight since Karl Lagerfeld’s passing in February. His half century at the brand left more than a footprint. As she said, it hardly made sense to refer to “the Lagerfeld era.” In the end, it was all just Fendi. And, in a significant way, his absence clarified exactly what that means now, and probably in the future, with Silvia at the helm.

Beginning with her typically quirky reference point, the bawdy British slapstick “Carry on Camping,” from 1969. If the men’s show in June took gardening as a launch pad, this one evoked the movie’s campsite in a slightly surreal way. Start with the camp calisthenics. Paperbag waist shorts and trousers in waxed or washed cottons had a stylish athleticism, the terrycloth shorts’n' jacket combination a little less so.

We’ve always expected the unexpected with Fendi. Picture the big quilted housecoat you might wear to the campsite showers, and the quilted toilet bag you’d be carrying. Silvia already did. The movie’s late-60’s vintage made its presence felt in bold, sunny florals. Flower power! The show closed to the tune of "Aquarius/Let the Sunshine In," the hit from the hippie musical Hair.

Romanity added a seasoning of bad taste to the collection. Silvia said she was happy not to fit in with the crowd when she travelled. That was scarcely likely to happen if you were wearing a pink bouclé cardigan over an organza floral slip dress, and chunky-heeled shoes with socks. Rome mightn’t bat an eyelid, but the tasteful Milanese would be horrified, she claimed. Although she also felt they might be seduced by the easy body-consciousness of the collection: the interplay of transparency and bands of fabric or fur, the abbreviated skirts and loose shirt dresses.

But really, it was the warmth — and the good humour — that made the show. And it was Silvia who brought both. In other words, a good start to her solo career.