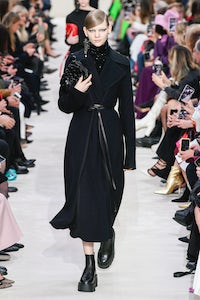 PARIS, France — “Not serious… relevant,” countered Pierpaolo Piccioli when questioned about the monochrome sobriety of his new collection. He paused for a moment, then accepted the suggestion that seriousness is relevance in the current hyper-antsy climate. Earlier in the post-show presser, he’d said, “Fashion doesn’t have to do manifestos, but for sure it has to record and embrace the big changes.”

So Piccioli made concessions to size, age and gender in his casting. There were trans models on his catwalk, and there were looks that embraced all possibilities. “A portrait of a generation,” he offered. “No, of a moment more than a generation. No ego, no ages. Same makeup, same hair, same wardrobe.” On the soundtrack was Billie Eilish, truly a new voice and one who transcended the generational concept, but Piccioli paired her with live strings in an alt-kultur-nu-kultur hookup that felt just right for the collection’s own mash-up of past, present and future.

The designer’s building block was the idea that uniform dressing allows individuality to shine. On his moodboard was a set of portraits by South African artist Marlene Dumas, broad-stroke watercolours whose technique created a superficial similarity between paintings that Dumas subverted with her details. Piccioli’s equivalent was basic black. It was particularly striking in light of the fact that his audience was filled with women wearing the graphic tropicalia of his spring collection, even though a chill winter rain was lashing the tented venue. (Hope springs eternal in the fashion breast.) They were confronted by black man-tailoring, black leather, sheer black lace shifts, and a sexy black widow, most of it anchored to terra firma with boots that would give Frankenstein’s monster pause for thought.

Piccioli pulled off the same kind of switcheroo with the couture collection he showed in January by shelving the extravagant colour and flou in favour of something a lot more structured and contrived. Black has always been the tradition for a couturier keen to highlight his cuts, and there was something of that here in fitted female silhouettes. But it seemed more to Piccioli’s point that black made a blank canvas onto which he could project his vision of a wardrobe that, as he put it, “crossed barriers.” Those slouchy pants that Leon Dame modelled with his sheer turtleneck showed up elsewhere on the catwalk. And the first look featured a coat from the men’s collection.

There was definitely something to be said for the power of reduction as it was presented in the show. In that, Valentino joins Bottega Veneta as another tentpole of Italian luxury that has significantly turned its back on ostentation. The strongest looks here — say, the black leather skirt with a flounced hem, matched to an oversized, deep-V sweater — were positively severe. Even muse Adut Akech, in a high-necked, long-sleeved column of red sequins, had a new restraint written all over her. And that was truly relevant.