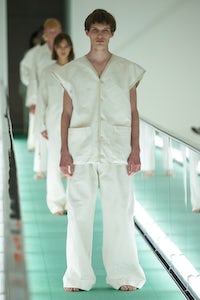 MILAN, Italy — An hour before he presented his latest Gucci collection on Sunday, Alessandro Michele was extolling the virtues of the fashion show. “It’s a way to bring you to another place,” he enthused. “You turn the lights down and for ten minutes, the only thing the fashion community really needs is to be here.”

But Michele’s karma has a way of colliding with the dogma of others. He opened his show with a sequence of plain cotton canvas institutional garb, the kind you find in prisons and hospitals, most of it laced or strapped with restraints. The first outfit was a straitjacket. Ayesha Tan-Jones, a non-binary artist, musician and activist who modelled in the show and who has had their own struggles with mental health, was roused to protest. When they reached the photographers at the end of the conveyor belt catwalk, they raised their palms. On them they’d written “Mental Health is Not Fashion.” The show was barely done and the controversy was already boiling.

Michele’s intention was to highlight “the mechanisms of subjugation” that discipline and deny society. He said the straitjacket was the starkest example he could think of. His show notes, prepared with his partner Giovanni Attili, a professor of urban planning, quoted the radical French philosopher Michel Foucault who ardently stressed the importance of resisting such subjugation by any means possible. For Michele (and Attili), fashion represents resistance, because it promotes freedom: the freedom of self-determination, of endless opportunity, of transformation. “Fashion in any expression is an escape to freedom,” the designer said.

He chose to make that point as blatant as possible by breaking his presentation into two parts, the first being the “uniforms,” the second being the new collection. They were divided by pitch darkness, an intense sizzle of static, then a flash of life. A schism, a dramatic piece of theatre. A psychodrama, even. It was an odd coincidence that Iggy Pop, a performer who made his reputation nearly fifty years by pushing himself beyond physical and mental limits of endurance, should be in the front row.

But the psychodrama on the catwalk also stemmed from the turmoil in the designer’s own head. According to Michele, Attili told him, “Let’s try to investigate the power of people who want to push you in a corner. You always feel oppressed.” Or at least bored. He’s well into the Gucci renaissance he has so spectacularly driven, and Michele is admitting he’s as terrified of boredom as Karl Lagerfeld always professed to be. The Greek chorus of doom watchers in the fashion world, waiting for the Gucci downturn they see on its inevitable way, can’t be much help.

So change was definitely on the menu for Spring 2020. A frisson of rumour had it that Michele was going to reject his signature overload – the colour, the pattern, the farrago of embellishment – for all-out black. It didn’t happen. It probably couldn’t happen, though Michele insisted his remarkable CEO Marco Bizzarri had told him he was free to do what he wanted. And thinking back to Michele’s arrival at Gucci five years ago, he was so fed up with fashion at that time he was actually quite prepared to tear the whole place down. “I felt I was in a cage. It’s why I wanted to destroy the language of the fashion show, the beauty.” That’s also why, in its peculiar, provocative reassessment of the fashion status quo, Michele’s Gucci landed with all the transformative power of punk.

That lightning didn’t strike twice on Sunday. But Gucci was different. “It would have been easy to go on and on doing the same aesthetic,” said Michele. “The numbers are good. But I have to do something I’ve never done. I know I’m that kind of gambler, even if the change could be an earthquake.” It wasn’t. The shift was more subtle. But it did hold out some interesting repercussions for the brand. Two words: SEX and ELEGANCE.

Michele claimed he’d staved off boredom by reacquainting himself with the reason why he became a designer in the first place: his love of fashion. “Fashion is such a fabulous language,” he said. “That’s its reality.” He’d been brooding on the 1990s and the freedom of expression designers enjoyed: the intellectual Miuccia Prada, the fantasist John Galliano and Tom Ford, with his “beautiful cliché of sexiness.”

“The way Tom looked at sex was ambiguous,” Michele mused. “His menage was strange, not just a couple, sometimes three, sometimes more. It was like he was destroying the family in a radical way. It was more like something pagan, and I was drawn to that perversity.”

Remember, this is Alessandro Michele talking here, whose Gucci has rarely ever edged into any zone that might be considered erogenous. That was definitely one of the changes on Sunday. Ford glazed Gucci with the power of sex. Michele wanted in. Sheer lace and lingerie looks, plunging necklines, slashed skirts, thigh boots and latex opera gloves, plus a long sinuous gown with a side slit and a petal cut-out on the hipbone that Ford muse Georgina Grenville would have elevated into the erotic stratosphere… "Freedom is being sexy in your own way," Michele gushed. When Madonna’s “Justify My Love” seeped into the soundtrack and the models showed up with riding crops and switches (or was that more Ms. Ciccone’s “Erotica” moment?), it was just as he described it: “Gucci’s equestrian past, perverted by fashion.”

But it wasn’t only the sexiness of Ford’s Gucci that seduced Michele. He was also enraptured by what he called its “strange elegance.” That quality may have been even more instrumental than sex in giving this new collection its character. Remembering Coco Chanel’s famous line — "elegance is refusal" — it was easy to trace a pared-down discipline in both mens- and womenswear. “I decided to subtract a few things,” Michele said. “The collection is a little bit less than more.”

Quite how this would work best is if you imagined the clothes on people other than Michele’s favoured catwalk clan. (He conceded that his castings are an update of “the beautiful ugliness” that Miuccia Prada pioneered in fashion.) In that light, his new collection became quite possibly his most alluring and accessible, for both men and women. But if more accessible should turn out to mean more commercial, that is really a sidebar. “Elegance is almost revolutionary,” Michele declared. “Especially for me.”

The words for the season, stitched on bags, embroidered on jackets, were ORGASMIQUE and ETEROTOPIA (Foucault’s concept of the kind of subcultural worlds within worlds that upend the status quo, like brothels and prisons). They made it easy to see how Michele’s Gucci has courted controversy. His reach could be read as exceeding the grasp of his chosen medium, so arcane and obsessive are his inspirations.

“Fashion is like sex,” he said. “A show is like an orgasm. It can be so fast, but it can be so deep.” Once upon a time, an orgasm was called “la petite mort,” the little death. Is it any surprise Michele considers fashion his therapist? Or any wonder that people have taken to working out their own traumas through him?