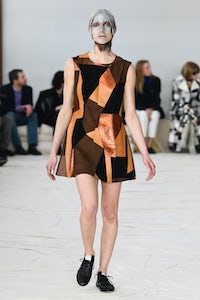 MILAN, Italy — On Francesco Risso’s Marni catwalk, there rested a massive silver capsule, looking like something newly fallen from space. The models emerged from it, heads smeared and slicked with stardust, their clothes a patchwork of old fabrics and clashing textures: dusters matching raw cotton to metallic leather, a coat of bleached velvet, a huge cardigan stitched together from mismatched panels of knits, a leather blazer over a dressing gown, a distressed brocade tied with a ribbon over a loincloth that might have been flocked wallpaper in another life.

Remnants, pasted, pierced, tied, tacked, stitched. I saw not only wallpaper, but cushion covers, shower curtains, tapestries, bedsheets, fragments of interior design…imagine an old house and all its contents being stripped back to bare boards, then every morsel of that deconstruction being remade by aliens with no roadmap to the remodelling. “An insatiable mosaic,” Risso imagined too. “Trying to reconstruct a sand mandala that has been blown apart by the wind.”

There was a wind — an electronic one — roaring on the soundtrack as the girls who had fallen to earth moved through the tented space (just like they tented the ET in Spielberg’s movie). They were all Alice, lost down the rabbit hole, relearning their new world, their new wonderland. “Where do I come from?” they plaintively asked, via Risso’s shownotes. “Where do I go?” Which was the question posed by one of the most famous songs from HAIR!, the hippy-trippy musical that introduced Middle America to psychedelia in the late 60s. “Follow my hand,” was one of the lyricist’s answers. Risso would probably agree. “Behind each object, there’s a hand,” he offered after the show, while he was attempting to elucidate his creative process to a sea of uncomprehending faces. “Is it the hand of time, or is the time of the hand?”

It could, of course, be both. The past was a massive presence in Risso’s collection. The antique brocades were woven on Venetian looms designed by Leonardo. The designer rhapsodised about fabrics that took so long to make they were much more precious than banal fur. And if they now existed only as scraps, Risso would find the beauty in such leftovers, creating art with them using the body as a canvas. This piecing together of elements, old and new, is responsible for the intricacy, the ingenuity of his designs. His latest looks were the purest expression to date of his ethos.

But that didn’t mean they weren’t less challenging than usual. I mentioned interior design earlier. It struck me that the interior that Risso was really interested in designing was the human psyche. Which is, appropriately, one half of the word “psychedelia.” His clothes, so fiercely antithetical to fashion convention, were transmissions. His models on Friday were emissaries. Risso danced down the catwalk as the White Rabbit. How many Alices will follow him down the Marni rabbit hole? “Your questions are the answers,” he claimed.

I can’t help myself, I’m going back to HAIR! and another heartfelt query from “Where Do I Go?”: “Where is the someone that tells me why I live and die?” Answers on a postcard please, c/o Francesco Risso at Marni.