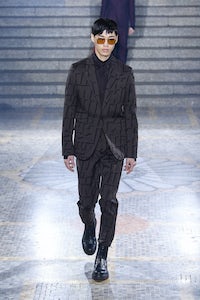 MILAN, Italy — Milano Centrale is Europe’s largest and grandest railway station. The logistics of staging a fashion show in such a location are formidable, which is why it’s never been tried. That was catnip to Alessandro Sartori, who has said he’s keen to take Ermenegildo Zegna to places in Milan that no one’s ever been, at least in the name of fashion. As an added bonus, the location embodied Sartori’s theme. “It’s a nice moment to talk about openness and inclusivity,” he said before his show. And the world comes together in a railway station. It’s an in-between kind of place where a wildly diverse mob is always on the move, always going somewhere else. That nomadic notion appealed to Sartori’s own peripatetic nature.

His approach to designing Zegna is equally mobile. The challenge is obvious. Zegna is a business built on sartorial tradition. But Sartori’s aim with his new collection was clearcut: “Nothing that recalls classic design.” He gave us jacquards instead of classic suitings, an overhaul of classic details like pockets (now slash, not patch), collars (detachable) and closings (a single loop, no button), a revision of the suit itself, the jacket now a blouson instead of a blazer, the trouser legs strapped to create a leaner silhouette.

Maybe those switches in sensibility weren’t so radical, but turn a cashmere coat inside out and you found a label with a minute manifesto. "Use the Existing," it read. The coat had been made with "pre-existing post-consumer natural materials which have been recycled with innovative processes." And not just deadstock. Blended fabrics have been the bane of recycling initiatives. Zegna has found a way to separate out the fibres in blended fabrics – cashmere from wool and nylon, for instance - and recombine them in a coat like one here, for example, which was 100 percent cashmere melton, completely recycled. A quarter of the collection “used the existing” in regenerated wools, nylons and cashmeres. Sartori imagined a moment when garments made from recycled fibres could be returned and recycled again, maybe with a discount as an incentive. Endless circularity! Sustainable fashion’s holy grail!

fabric innovation is part of the DNA of Italy’s fashion culture. Sartori’s collection highlighted other genetic strains. The way the country’s past influences its present, for instance. Though conceived long before Mussolini came to power, he co-opted Ulisse Stacchini’s railway station as a monument to his modernist ideal. Modernism infected Italian art and culture because it looked like the future (or at least what people imagined the future might look like). Elsewhere, it became more familiar as the Art Deco style. Sartori has evoked it in the past, with strong lines, bold volumes and the geometric patterns that characterize Deco conspiring to create a pop futurism.

They were all here in this new collection, along with a dusty, muted colour palette — plum, blue, grey, dull gold — that echoed Ferdinando Scarfiotti’s production design for “The Conformist”, Bernardo Bertolucci’s dazzling celluloid reflection/takedown of the modernist style. That’s the continuum that Sartori is on. Not bad.

But was that the intended audience for such sophistication lined up along the front row in their boxfresh Zegna sneakers? Yes, it was diverse. Inclusive too, of boys, boys and more boys. Sartori undoubtedly gave them (or their stylists) plenty to chew over. A tie-dyed calfskin anorak? Have you ever seen such a thing? But the real stars of the show were the Zegna coats. They’ll separate the men from those boys.