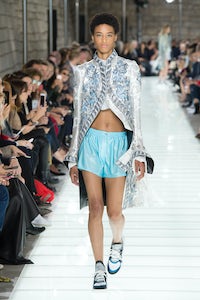 PARIS, France — One obvious talking point in Nicolas Ghesquière’s new collection for Louis Vuitton was the "Stranger Things" t-shirt he layered over a puffy-sleeved floral blouse that might have dressed a woosome swain in the court of Louis Quatorze. A leftfield blend of high and low is a Ghesquière signature. He did, after all, enter the fashion limelight with a Balenciaga revamp set to a horror movie soundtrack by The Goblins. His instinct for the unlikely match meant that you never knew what to expect at Balenciaga. And, season after season, that elevated anticipation to fever point. Who could ask for anything more?

Ghesquière hasn’t been so lucky at Louis Vuitton. The pot’s gone off the boil. Or at least it had until Tuesday night. There was a fearless nothing-to-lose kick to the new collection’s high/low chatter that brought Ghesquière's Vuitton back from the brink. It was a perfect storm. The setting was the medieval moat of the oldest bit of the Louvre, recently revamped as the Pavillon de l‘Horloge, where visitors learn about the significant transformations the building has gone through over the centuries. The soundtrack was a gigantic choral extravagance by French musician WoodKid that sounded like a requiem for the death of ages. And the clothes were – initially, at least – a startling time machine, lavish brocade frock coats paired with silky athletic shorts and chunky trainers, 18th century aristocrat meets 21st century gym rat. It’s not the first time a designer has initiated this particular dialogue between past and present — Alexander McQueen and Raf Simons both had their frock coat moments — but it still felt like a breakthrough for Ghesquière at Vuitton. If the brand’s raison d'être is travel, he’d certainly found his own way into the idea: time, not place.

After the show, he was talking about anachronisms, historical incongruities. They were all over the collection: the urchin Oliver Twist trousers; the flowing floral gown laced under the bust, like Marie Antoinette’s nightie; Mica Arganaraz’s embroidered leather jacket, which might have been pinched from a mariachi band. When you stick Louis Quatorze’s stock tie shirt next to a stretchy little tube fit for the starlet du jour next to…well, next to a "Stranger Things" t-shirt , you can’t help but create a frisson. Which is exactly what Ghesquiere did on Tuesday.