At Topman, Gordon Richardson celebrated a British institution of a different stripe: the seaside town 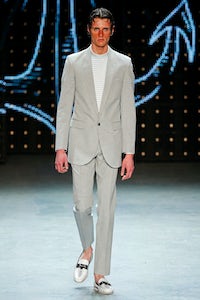 At Topman, Gordon Richardson celebrated a British institution of a different stripe: the seaside town

LONDON, United Kingdom — At the same time as the Queen’s 90th birthday celebration was beginning with maximum pomp and circumstance in St Paul’s Cathedral yesterday, Topman was celebrating a British institution of a different stripe: the seaside town.

Penny arcades, funfairs and piers, holidays from hell, dirty weekends, drunken tattoos, mods, rockers and teddy boys heading to the coast for a riotous time… they were all mashed up in a cheap and cheerful collection that teetered along the knife edge of vulgarity that photographer Martin Parr captures so well in his pictures of the Great British Seaside. The models were even given a bit of colour to look like they’d passed out drunk in the sun. And the styling did a great job of capturing their gawkiness, right down to the VPL.

For creative director Gordon Richardson, it was a trip down memory lane, kick-started by the popular referendum the UK will soon be taking to decide whether it remains tied to Europe or not. “It’s made me reflect on what I love about the UK,” said Richardson. But what came out in the collection was a peculiar British domesticization of Americana. As Mr Richardson pithily observed, “Seagulls are our eagles.” 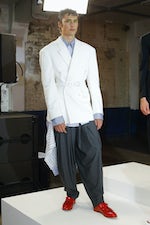 At Topman, Catnip for Gen-Z 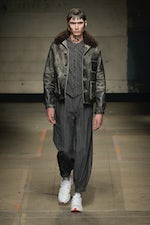 A Rabbit out of a Hat 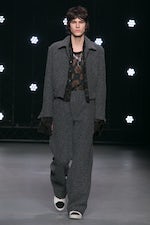 All About the Louche