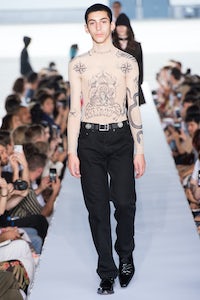 PARIS, France — In a motorway underpass on the outskirts of Paris, Demna Gvasalia laid out long, white-cloth-clad tables as if for a wedding celebration. His models would walk on those tables, just as they did once upon a time in Dries Van Noten’s magical presentation for Spring 2005. Except that, now, it wasn’t escape Gvasalia was after. Instead, he’d conceived a fashion show that was all but a massive therapy session.

He was wearing a t-shirt with a target printed on it. When he took off his jacket, there was a bullet hole in the back. “They tried to shoot me many times,” Gvasalia said flatly, as he reflected on his upbringing in Georgia. He can’t go back there. He’s gay, so they would shoot at him again. Family, war, the past…these were the themes for his new Vetements collection. Unsurprisingly, he called this presentation his most personal fashion proposition. “I’ve always done shows about clothes, questioning my creativity. But it changed this time. I need storytelling now. I’m questioning my roots.”

Gvasalia said he felt like he’d been making a movie rather than a fashion show. Clothes are character. When he was a kid, he’d inherit his cousins’ hoodies, sizes too big. And his grandmother loved to put shoulder pads in everything, even t-shirts. Right there, you’ve got the outsize ethos of Vetements in a neat little pocket. It was all through the show.

But it wasn’t only his own story that Gvasalia was telling. His community, driven apart by sectarian violence, loomed large. At first, he said the faces masked by balaclavas or leather hoods represented the way he had to mask the truth of his own identity as a gay man in Georgia. In the context of Gvasalia’s family story, it was easier to see them as representative of the paramilitaries who obliterated families he knew. And he eventually conceded an equivalence between the male appetite for violence and sado-masochism, embodied here in zipped-up bondage masks.

In the midst of life and death, there was fashion, in the form of a sinuous bias-cut dress with a trompe l’oeil turtleneck top dangling uselessly off its back. There were also dresses with sunrays of plissé radiating from their floral core, and kaftans of folkloric prints luxuriant with fringing. Eventually, there was even a veiled virgin bride. But the guts of the collection were its confrontational coming to grips with Gvasalia’s past. Tough, military-influenced sportswear, many of the pieces scripted, not Cyrillic, something else. He said most of them read GEORGIA, but there were other pieces that contained a Russian insult so vile he was worried about the fall-out for his family, gathered for the first time ever at one of his shows. “But it’s something I’ve been wanting to say to certain people for years.”

The show was stark, intense, martial. Gvasalia wondered if he should have invited his therapist. But the harsh spirit of exorcism had actually been induced by a universally consoling truth. He’s in love, and that’s why he felt comfortable confronting personal history for the first time. “This could have been my first show five years ago,” Gvasalia said. “But only now I’m ready to cope.” I can’t imagine he’s switched gears so completely that he now believes love will save the day. But it was an uplifting flicker of light in a show whose aggressive, dark heart otherwise mirrored the current mood of the world.