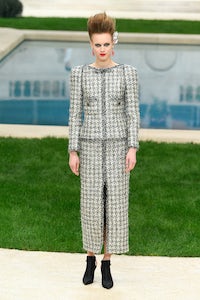 PARIS, France — When Karl Lagerfeld didn’t take his customary final bow after the two presentations of Chanel’s Spring 2019 couture collection on Tuesday morning, his no-show was alarming enough to occasion a stern-voiced announcement in the Grand Palais (which did little to allay concern) and a release from the house a few hours later letting us know that the designer was “feeling tired” and had asked Virginie Viard, director of the creative studio, to represent him. Viard, the woman who has been called “Karl’s secret weapon,” has been taking a bow with him for a couple of seasons now, so it was hardly a bombshell when she stepped out on her own. But when he didn’t follow, there was a moment of heartstopping shock. Ironic that the last words I wrote before I collapsed into bed on Monday night were “expect the unexpected.”

At such moments, you fall back on a bromide: this one time, Lagerfeld decided to let the clothes do the talking for him. And this they did, with a collection whose flowery sweetness and light brought a breath of spring into the frigid atmosphere of the Grand Palais. The set was Chanel’s typically extravagant blend of trompe l’oeil and réalité, the backdrop a pink Mediterranean villa with stairs that swept down to a swimming pool lined with palms, cypress and orange trees laden with fruit. You could almost smell the mimosa. The one thing to mar the fantasy was that it was so cold in the venue you could see your breath. But if the Arctic arrived in Cap D’Antibes on Tuesday morning, Karl’s flowers still flourished, handpainted on the pure white background of an organza skirt, crusted on a sheath that restrained a tutu of tulle, translated into the ceramic blooms that decorated Adut Akech’s strapless dress. There were even real flowers set in resin as embellishments on one outfit’s trompe l’oeil bolero.

The paradox of substance with lightness is one true test of a couturier’s skill. Chanel’s airy tweeds are a familiar case in point, but here, Lagerfeld went on to compose a “plaid” from chiffon squares. Maison Lemarié’s featherwork was a highlight, from delicate little flowers to dramatic plumed swathes. The bride walked in a crystal bathing suit and cap, her veil glittering with sequins. Spring weddings on the Med? The pool begged for an Esther Williams routine. The temperature forbade it.

The stentorian Cassandra who delivered the update on Karl at the end of the show told us that his influence for the collection was the 18th century, his favourite time in history. The pale, pretty colour palette was Boucher. Rococo curlicues of embroidery trimmed a white sequined jacket. The silhouette suggested panniers. It was actually achieved with a folding effect that was a new feature: origami at the neckline, pannier at the waistline. Lagerfeld filled the “hollow folds” with flowers.

But Lagerfeld was never going to be literal. That’s why the prettiness was weighted with Chanel’s rigorously classic black and white, and a flurry of black leather. They had a distant echo of Lagerfeld’s own taste, guaranteeing that he was present in his absence.