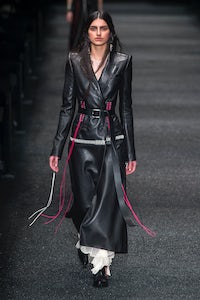 PARIS, France — One of the most enduring symbols of female empowerment is the witch, despite the dominant patriarchy’s centuries-long efforts to burn her, drown her and otherwise exile her from her community and write her out of herstory. The collection Sarah Burton showed for Alexander McQueen on Monday night was an arse-paralysingly beautiful celebration of female paganism, and of a spirit of community too. Like last season, it stemmed from a road trip Burton took with her team — this one to Cornwall, the witchiest part of the United Kingdom — where they walked Bodmin Moor and visited the ruins of Tintagel Castle, both sites that are fundamental to the legend of King Arthur.

On one of their ambles, the McQueeners came across a “cloutie” tree, where people tied charms and ribbons as they made a wish. Hopes, dreams, magick, the life force of women, their primal connection to the earth…with such potent ingredients, it would only have been a wonder if Burton hadn’t served up one of the most unforgettable dishes of the entire season.

It was the gentlest collection she has shown, even if it did open on a note of high drama, with a black leather coat sutured in blood red. I’ve heard this particular stitch called the Frankenstein stitch. It worked here to convey the notion of a new life form being born. The effect was duplicated on white knit, the curves of the body defined by the lacing, which floated away from the clothes like those ribbons tied to the wishing tree.

Then there were tweeds, twisted with electric yarns and strips of chiffon, again inspired by the “cloutie." But there was softness in the way the clothes caressed the body. Once, there would have been corsets. Here, there was knitwear engineered for shape. Or cashmere felting that was cut into languid, generously tailored pieces, paired with thick-soled sneakers.

And then a dozen pieces de resistance, silk dresses embroidered with signs and symbols — Druidic, alchemical, botanical (all of them researched in the Victoria and Albert Museum). The embroidery dissolved into a veil of coloured thread or a trail of feathers. Burton mastered such effects an age ago, but they have never felt quite so fresh and alive, quite so in tune with the primal soul of the collection. Sarah Brannon, in a psychedelic sheath of vibrant, shifting flora and fauna, looked like the female version of Ray Bradbury’s Illustrated Man. She’d put a spell on you as soon as look at you. She was stunning.

And that undertow of the dark, the danger, gave the collection an irresistible edge. The set was hung with huge woven silk banners by Mathias Augustyniak and Michael Amzalag, the M/M of design legend. They looked like images of sunsets, but turned sideways. “The world’s turned on its head,” said Burton. Please Lord, let the season of the witch be upon us.