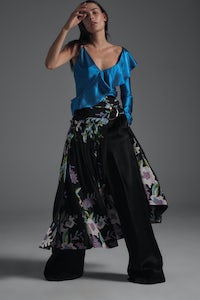 NEW YORK, United States — Jonathan Saunders always favoured interesting, unusual female characters as inspiration for his own women’s collections. As the new creative director of Diane von Furstenberg, he has himself a doozy: his boss. “Provocative, intelligent, sensual,” he reeled off the attributes that fascinated him about Diane.

They’re a natural fit, both of them defined by spontaneous mixes of colour and print. But von Furstenberg has stepped back to allow her new hire full rein, so the collection he presented on Saturday was a promising symbiosis of sensibilities, with Saunders’s thumbprint quite clear in, for example, the knitwear.

Movement is something else that has always been important to both designers. Once, jersey would have been DVF’s fallback position. Here, Saunders opted for silk crepe de chine, draping it on the bias, collaging florals and polka dots.

The results — scarf-hemmed, spaghetti-strapped, flounced — had an elegant, sensual air of the 1930s, a decade which influenced the glamorous style of von Furstenberg and her friends when they were shaping the 1970s. Same echo in a standout group in blinding white cotton, including a deconstructed tennis dress, a long skirt and a pair of generously cuffed pants, all decorated with vertical ribbons of colour, the latter featuring a folded-over waistband, “like judo pants,” said Saunders.

The classic wrap dress achieved maximum effect with minimal effort, but, as the ad used to say, you’ve come a long way, baby. Even so, if there was a lot more going in the new DVF collection — the khaki trench with the polka dot lining, the bias cut pieces in a new scribble lace, the cardigan coat in suede —  the same easy, fluid spirit  prevailed. The chemistry is clear — between chief executive Paolo Riva, creative director Saunders and von Furstenberg herself. This could be a textbook rejuvenation of one of New York’s favourite fashion legacies.