Daniel Lee ushered in a highly anticipated new era at the label. The result was awkward, heavy, dark and dystopian. 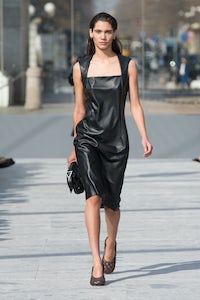 Daniel Lee ushered in a highly anticipated new era at the label. The result was awkward, heavy, dark and dystopian.

MILAN, Italy — It seems like an age since unknown quantity Daniel Lee was ushered in to a new era at Bottega Veneta, superseding Tomas Maier’s transformative 17 years at the helm. There was a pre-collection that wet fashion’s whistle, but Friday’s catwalk unveiling was the real main event. And wouldn’t you just know that anticipation is the sternest taskmaster of all? Lee himself looked so drained, so hunted after the show that a mere hello felt cruel.

Understandable. Maier built a world of peculiar psychological depth at Bottega. Yes, there was the luxury of the beautifully crafted accessories. The intrecciato bags! But there were also clothes that expressed a very peculiar, very particular worldview, distilled from decades of film noir and Hitchcock and the brittle social interactions that intrigued Maier. Where did that leave Daniel Lee? Would he acknowledge or would he reject? The opening look — black leather dress, portrait neckline — felt like some kind of common ground, a transition. Then Lee launched his radical re-interpretation of BV. Bye-bye film noir. Hello, The Matrix, complete with gigantic, stomping boots to kick your way into the future.

It was awkward, it was heavy, dark and dystopian. Intrecciato exploded, leather quilted in defence or tiled in odd articulation, dissected knitwear, clumsy silhouettes that nipped waists and pushed shoulders back. And all the time, trousers tucked into those boots, the footwear of militant young men and women. The grim, blunt-toed high heels were scarcely an alternative. Lee came to BV vaguely wreathed in his stint at Celine, a label which is, in the light of subsequent developments, already a misty hinterland of fashion myth. There has been some speculation that BV might scoop the old Celine business. Pardon me if my brow knits into a Botox-proof groove at that notion, on Friday’s evidence at least. Poor exhausted Daniel Lee said that all he wanted to do is make beautiful clothes. Let’s step back, take a deep breath and give him the benefit of the doubt.