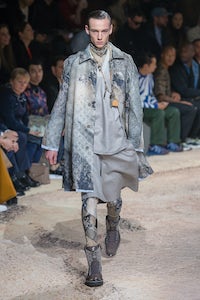 PARIS, France — “It’s everything I love,” said Kim Jones, reflecting on the content of his sign-off from Louis Vuitton. The personal chord those words struck echoed all the way back to the first collections he showed for himself, nearly 15 years ago, when he was pioneering the fusion of streetwear and formal dressing that has since become the definitive template for contemporary menswear. Even as Jones was ascending to the peak of Mt Fashion, and a gig with Louis Vuitton, he never lost track of his street-y, clubby, crazy fanboy roots. Andre Walker, one of his design heroes, was in the audience for his send-off on Thursday, but so were the old London gang he’s partied with for years. Two of his girlfriends joined him on the catwalk for one last hurrah. Of course, you’re practically guaranteed to break the internet when said two are Kate and Naomi.

Goodbyes can be tricky – too long, too sad. Jones dodged elegy with a show that wrapped up his passions in a bright shiny bow. “I wanted to leave nice things,” he said. The bright came courtesy of radiant fluoros, the shiny was the rich metallic seam that ran through the collection, in silvery leathers and jerseys, in titanium-trimmed accessories, in the golden gloss on a herringbone carcoat (David Beckham was already wearing it in the front row). From the very beginning, Jones has always known how to make stuff look rich. The key shoe in the show was a cowboy boot mounted on a hiking sole. Try that in silvered python.

The cowboy boot cued a key influence for the collection. When he was in Jackson Hole, Jones noticed the cattle wranglers, young guys wearing leggings under shorts, a look that would read “bike courier” in a more urban environment. He was mesmerized by this modern take on the Wild West. “When he was in Jackson Hole…” That was probably just one of a dozen places he visited in whatever month that was, which made Jones a perfect fit for Vuitton, a company that defines itself by travel. His own upbringing inclined him to an obsession with flora, fauna, far off lands, wonders of nature, and he was able to bring that obsession into his work, even more so when Vuitton’s deep pockets allowed Jones to realise what could once have only existed in fantasy. The prints that defined his last collection were based on photographs he took from a helicopter flying over Africa’s Great Rift. Or, more specifically, Lake Takana, the Painted Valley, and a photogenic lava flow. They appeared on everything, from silken outerwear to second skin tops and tights, and, in their odd, alluring mix of luxurious substance and idiosyncratic inspiration, they defined the Kim Jones design ethos.

That’s the kind of rare vision you can imagine a brand will miss. And, equally, you can imagine the speculation that erupts when such an individual becomes a free agent. There was all of that on Thursday. So best leave it for now to the shownotes to distill the seven years that Kim Jones spent under the Vuitton umbrella, and to hint at the essence of whatever his future might hold: Never a destination, always a journey.