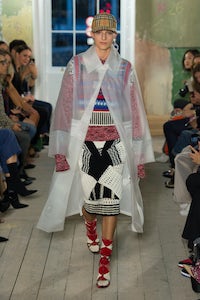 LONDON, United Kingdom — A lot changed for Burberry during its show on Saturday night. Everything from the brand’s new venue (Old Sessions House, a grand but decrepit 18th century courthouse in East London) to the show soundtrack (no more the open heart of the sensitive singer-songwriter, now the glorious electronic surge of Pet Shop Boys). And, in keeping with Christopher Bailey’s recent commitment to situating the brand in a broader cultural context, there was an exhibition of over 200 photographs he co-curated with Lucy Kumara Moore and Alasdair McLellan (whose pictures of military cadets filled one wall). The photographers ran a gamut — society, landscape, documentary, portraiture — and all together, they were intended to create a composite high-low image of British society. Penthouse and pavement.

As a reminder of that fundamental dichotomy, anti-fur protestors raged on the other side of the 18th century shutters of the room where Bailey conducted his post-show interviews, an incongruous demonstration given that this particular show was decidedly fake in its furriness. (As an effort to make the British Fashion Council accountable for any fur on the show schedule, it barely made more sense, but still!) Though, in a curious way, the protest did highlight Bailey’s current challenge: relevance! And that might have been where the biggest change occurred: a shift in sensibility.

Burberry is a huge and successful brand, but that’s an easy recipe for moribundity in fashion. Bailey acknowledged “the need for fresh eyes.” He claimed that’s just what curating the photography exhibit had given him. In particular, he mentioned photos of the women who protested against the US base at Greenham Common in the early 1980s. Wrapped against the elements in their symbolic years-long siege of the site, they made Bailey think about “other ways of talking about protection”. So a key item in the new Burberry collection was a gussied-up plastic raincoat, in pink or plaid or teal, sheer over Kiki Willems. He claimed there was a special craft in the manufacture of these coats which elevated their prosaicness.

Fresher eyes still came from Bailey’s recent collaboration with Russian fashion wunderkind Gosha Rubichinskiy. He wanted rawness. He got it from the fierce, sexy functionality of Gosha’s sportswear. It added an edge to his own work, especially in the menswear, though Adwoa Aboah in cap, tan blouson and white t over filmy green lace was the purest embodiment of the idea. Maybe it was Gosha who reactivated Bailey’s interest in the classic Burberry check, because that was all over the collection. Still, in the interests of brand renewal, he certainly wasn’t afraid of other classic Brit-isms, like military jackets, officer’s coats, regimental scarlet, fairisle knits and tartans galore. In fact, they were fetishised. One tartan pencil skirt turned to reveal a clear plastic panel in back. A fleeting glimpse of the new Burberry?

With the last collection and this one, there is a real sense of a designer hungry for a creative turnaround. Audience response was reassuringly positive, but what Bailey does next will surely clarify the brand’s future.