Or so a close watcher of menswear could be forgiven for thinking while contemplating the city’s Spring/Summer 2019 London Fashion Week Men’s schedule, notably thin after another round of departures.

There were the longstanding holes left by heavyweights Burberry and JW Anderson, which abandoned the calendar three seasons ago to present their men’s collections during co-ed shows at London’s women’s fashion week. But missing, too, were young stars like Craig Green, who, this season, sailed off to Pitti Uomo (and may well have his sights on Paris) and Grace Wales Bonner, who opted to skip a show altogether for private appointments.

The proceedings, down from four days to three, seemed at a crossroads to say the least, sparking persistent rumours amongst the fashion flock that London Fashion Week Men’s — now in its sixth year — may not survive to fight another season.

But there was a silver lining: the gaps also made space for new talent to shine. “The absence of Craig Green and Wales Bonner affords attention to newer names like A-Cold-Wall, Cottweiler and Martine Rose,” said Damien Paul, MatchesFashion’s head of menswear. 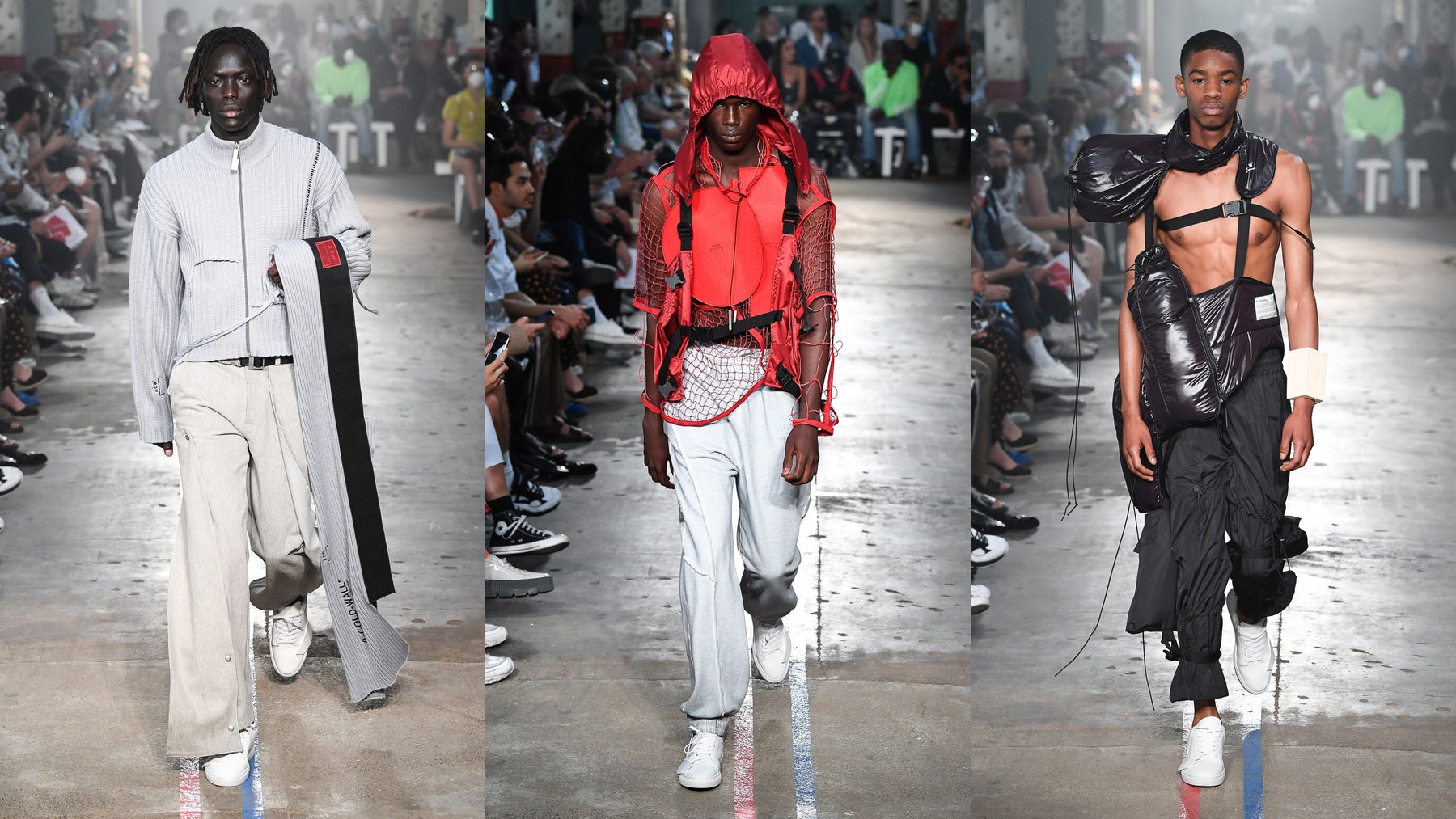 And there were others.

On Saturday, Matthew Miller staged a show entitled “Paradise Lost” in a bunker-like underground carpark in Chinatown, which proved fitting for the brand’s survivalist collection. “It’s like a new underground scene,” said Miller of his pocket-heavy utilitarian vests — once again rendered in neon — safety glasses and bright yellow Peli cases (used by war photographers), all of which screamed protection. There were plenty of references to Helmut Lang — see the padded bulletproof vests, jackets as backpacks and silver-foil trousers — but an activist, anti-establishment attitude took things in a new direction.

“This generation is into recycling and technology. We’re starting to see the two merge and coming up with some really good answers. It’s more of a positive approach,” explained Miller, referring to a recycled streetwear collaboration with American sportswear brand K-Swiss that was integrated into the collection.

The absence of Craig Green and Wales Bonner affords attention to newer names like A-Cold-Wall, Cottweiler and Martine Rose.

On Sunday morning, Xander Zhou dreamt of a tech-enabled, trans-human age of liberation, striking a futuristic chord that ran through some of the strongest shows of the week. Zhou’s army of models, walking in random loops as the soundtrack repeated “I am digitised / I am virtualised,” included perverse nurses, a six-armed god and pregnant men. “It’s the world I want to create for the future,” laughed the Beijing-based designer. “I want to draw a human map where different characters co-exist.”

Zhou branded his latest outing with the fictional corporation Xander Zhou & Co but, theatrics aside, the unlikely pairings he showed — cycling sleeves under printed bowling shirts; logoed formal shirts with sporty, terrycloth bottoms; padded mini-shorts worn over skin-tight trousers — worked surprisingly well together. Also worth a note was Zhou’s eyewear collaboration with Gentle Monster and his footwear partnership with Nike, which is rebooting its fashion strategy and popped up a few times during the week. 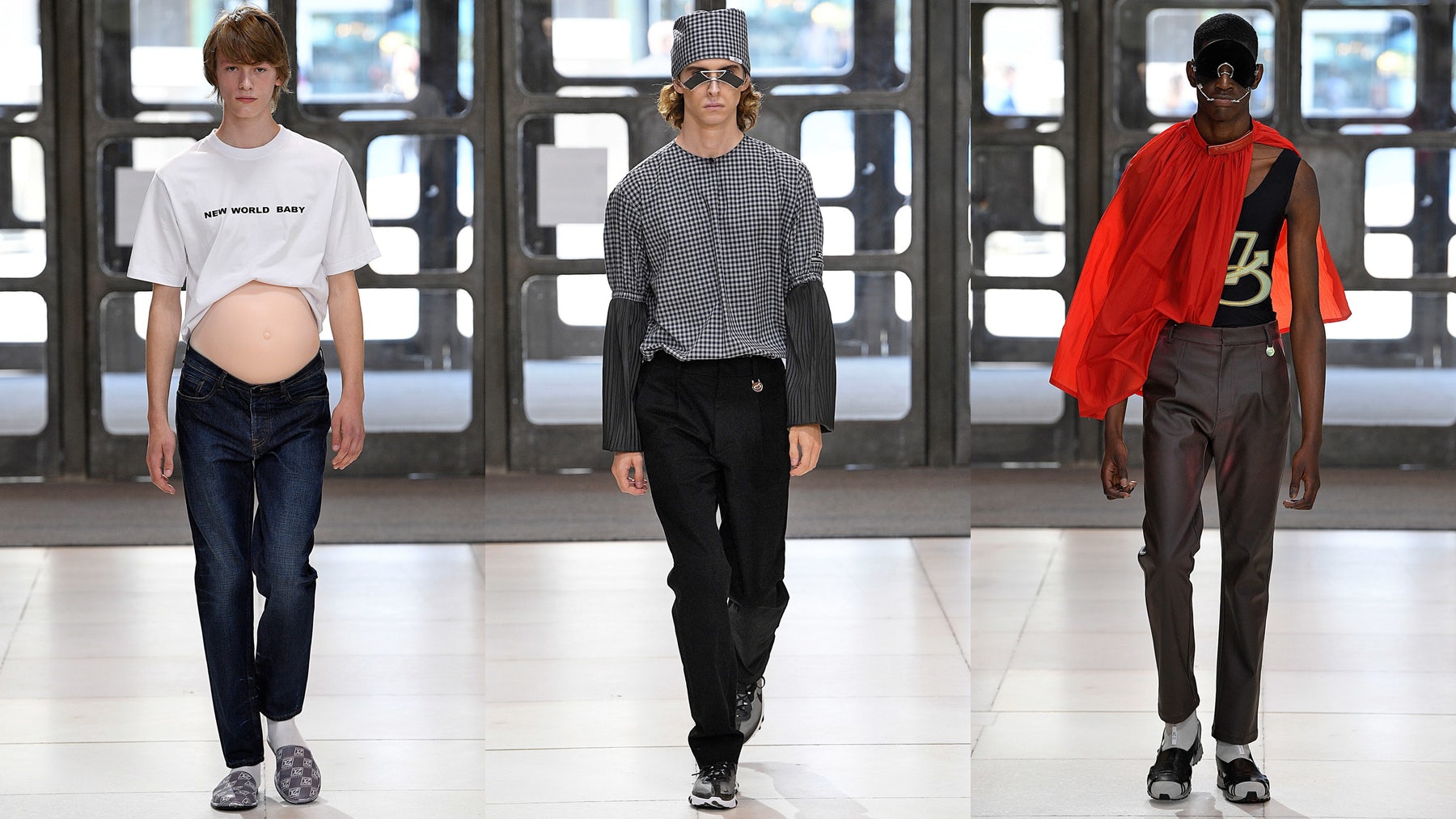 Cottweiler founders Ben Cotrell and Matthew Dainty, too, dreamt of transcendence. For their latest collection, the duo drew inspiration from a therapy retreat in Leura, high up in the Blue Mountains of Australia. It was a moment of “personal transformation,” they said. One which gave the collection plenty of reference points, from the cupping marks on the bodies of their models to T-shirts with lotus flowers and a soundtrack repeating: “The world has not given you a spirit of fear but love, power and sunlight.” One model held a lightbox displaying a waterfall, as if it was ripped straight off a therapist’s wall.

It made for a wellness-inflected outing that was, at times, humorous. “It’s about escaping and being relaxed and not being restricted or taking everything too seriously,” said Dainty. “It’s about what’s inside instead of outside.”

But while there was surely a touch of irony at play here, the garments had plenty to be serious about. Cottweiler’s ability to innovate its classic tracksuits for instance — this season they came in tailored leather and colourful transparent plastic — as well as its footwear collaboration with Asics are bondafide signatures.

Samuel Ross, a Virgil Abloh protégé and founder of street-luxe label A-Cold-Wall, also looked to the future in what was one of the strongest — and most relevant — shows of the week. “I want to make clothes for the future instead of focusing on where I’ve come from in the past,” explained Ross, underscoring his ambition to present an intelligent, luxury-level take on streetwear rooted in his long-standing exploration of the British class system. “There’s a sense of freedom in how I can show hardship in a more aspirational way.”

His latest collection came in an array of luxurious colours, including earthy oxblood, hazardous yellow and silvery blue — and explored the troubled relationship between humans and brutalist architecture à la social housing projects. The theme came alive most powerfully in the fastenings, from heavyweight zip pulls and velcro patches to wireframe hangers, plastic clasps and at least three variations of buttoning. 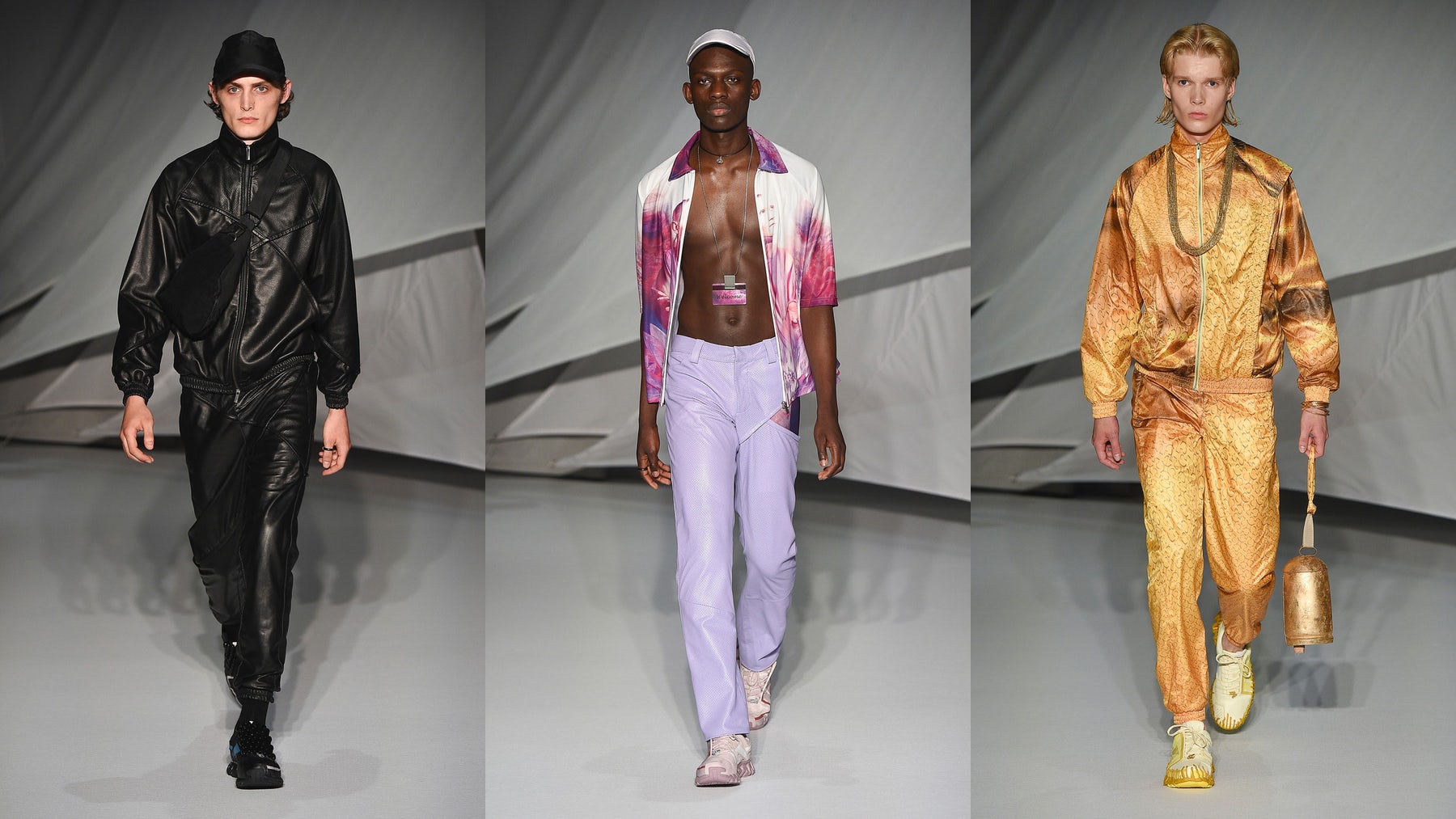 The show was titled “Human, Form, Structure” and set out to “break the down walls between social demographics,” explained Ross. He wasn’t kidding. For a finale, a phalanx of ash-covered models sporting Nikes tore down the walls of a giant box to reveal a man covered in what looked like blood, rising like a man-sized tadpole reborn.

Another young designer showing potential this week was Bulgarian designer Kiko Kostadinov, the Central Saint Martins graduate known for his minimalist, technical take on uniformed dressing. This season, Kostadinov looked to Martin Kippenberg’s The Happy End of Franz Kafka's “Amerika” set in a fictional town on the Ganges river in order to evoke the energy of social mobility in urban India.

The result were well-cut, tailored, double-faced workwear jackets; functional, pastel anoraks made in collaboration with Japanese performance-wear brand Asics; and makeshift Bulgarian military Meshka bags, all of which were mix-and-matched in order to represent men at various stages in their life, at different levels of authority. “This season it was about building more narrative into the brand,” said Kostadinov.

Over at Martine Rose, the designer staged an open-to-the-locals street party in a Kentish Town cul-de-sac. It was a touching homage to London, the city she loves, and editors and buyers sat beside senior citizens and young children up past their bedtimes. The clothes themselves were a true reflection of the British capital’s street style and ranged from kitch-y leopard printed track tops paired with gold chains to chunky vintage knits with biker shorts.

The week closed with Charles Jeffrey’s Loverboy, which, like Xander Zhou, explored trans-humanism as well as body dysmorphia in one of the most anticipated shows of all. But was all the young talent on display enough to save London Fashion Week Men’s?

When asked if there was any truth to the rumours that this season would be its last, British Fashion Council chief executive Caroline Rush was quick to squash speculation.