A Sombre and Sumptuous Autumn at Zegna

Stefano Pilati shines with a plush parade of hommes fatales. 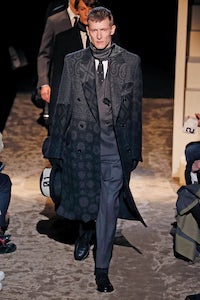 A Sombre and Sumptuous Autumn at Zegna

Stefano Pilati shines with a plush parade of hommes fatales.

MILAN, Italy — In a YSL collection ten years ago, Stefano Pilati showed back-buttoning tunics for men, memories of which subtle audacity were reawakened in the Zegna collection he showed on Saturday morning, where the boys once more walked in tops that would require a second party to zip them up at the back. It’s the kind of languidly ambiguous notion Pilati has often toyed with, made all the more striking here as a component in a collection that presented a sombre yet sumptuous image of masculinity. haute couture for men, the designer called it. His hommes fatales bore numbers like the models in an old-school salon presentation.

Pilati’s signatures were on parade. His knack for defusing formality, for instance, most obvious with the broken suit, but he’ll also attach a drawstring waist to a pair of pinstripe trousers. He loves playing with volumes, as with trousers whose bagginess was emphasised by deep pleats (up to five on some pairs). And it wouldn’t be a Pilati collection without an undercurrent of the outré. Those back-closing tops, clearly, but also the dark glitter of a lurex-shot roll-neck with bead-encrusted cuffs, or the sweaters studded with bejewelled embroideries. The Zegna mills showed form with muted but plush jacquards, woven in patterns that were reminiscent of mosaics and tapestries. They were carried over into the footwear, micro-perforated in swirling patterns. But at the same time, there’d be a quilted bomber in recycled polyester, a reminder of the house’s facility with fabric technology.

Elegance is a constant with Pilati. It infused this collection in ways overt (an overcoat in black boucle) and not so (the strip of jet beading that traced trouser seams). Michel Gaubert offered the most appropriate accompaniment with Bowie’s "Right." Likely not the first time we’ll hear from The Master this season, but so right here, given that he was the ultimate homme fatale. 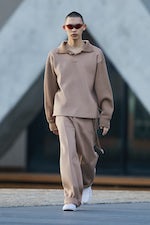 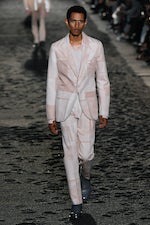 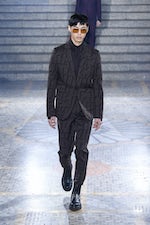 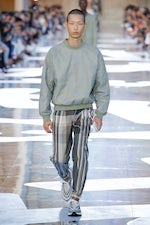