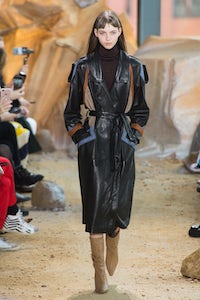 NEW YORK, United States — If Lacoste’s soundtrack of Middle Eastern pop was Felipe Oliveira Baptista’s oblique comment on travel bans, his other political statement was even more subtle. The here and now is a challenge to anyone’s positivity — call it Present Shock — so Baptista opted for an idea that has, for him, always stood for ultimate optimism: a sci-fi Future where heroic astronauts fearlessly probed the depths of space.

No surprise that Baptista’s favourite research moment for his new collection was a trip to the Museum of Cosmonautics in Moscow. And he set his show on Mars — or at least, a meteorite-strewn simulacrum of another planet.

All of which sounds an aeon away from the tennis-court origins of the Lacoste brand. Except that Baptista discovered that Rene Lacoste himself ended up investing in the aerospace industry when his sporting days were done. So his contemporary iterations of an astronaut’s jumpsuit were actually in tune with the Lacoste legacy. Sort of.

This was definitely a collection where Baptista flexed his design muscles in service of something more personal than brand heritage. In the past, he has managed a masterful balance between fashion flourish and pure sportswear functionality. Here, that balance tipped. Stuff looked tricksy, reversing, inverting. Proportions were as peculiar as the colour palette.

Alongside his space age subtext, Baptista explored grunge and streetwear from the 90s, his ideas of modern classics. In a weird way, that made sense. In the cold wastes of space, wouldn’t big, schlubby clothes, lumberjack shirts and mohair cardies make you feel cosy and earthbound, like Captain Kurt (Cobain) of the Starship Enterprise? Whether it worked for Lacoste was another story.