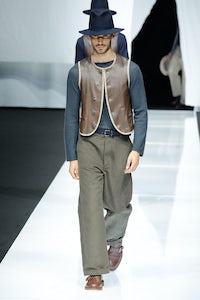 MILAN, Italy — Unstuffed tailoring made Giorgio Armani a billionaire, so it’s the well he will always go back to for refreshment. There is something almost noble about his soft, casual suitings. It’s the nobility of the salt of the earth types in those neo-realist Italian classics that helped shape his sensibility — honest working Joes (or Giovannis) who had no time for sartorial fuss and bother. Kind of like the country folk that August Sander photographed in Germany a few decades earlier. The hats that Armani stuck on his models on Monday echoed Sander’s “Young Farmers, 1914”.

If the collection was built around the Armani-izing of the double-breasted jacket (a piece which comes laden with associations ready to be shaken down), the show backdrop of huge white sheets hung out to dry, a snapshot of any Mediterranean island in the summer, set the tone for everything else. Should you wish to wear a double-breasted jacket to the beach (the show notes proposed it), then Armani’s would be the one you chose because he showed white and navy versions that looked like someone had already been swimming in them: loose, soft, washed-out.

And that same spirit of careless sartorialism infused the collection. The sandy suedes, the oversized shoulders, the box-pleated, wide, cropped pants, the ribbed, seersucker-y textures with a salty crinkle, and the waistcoats that replaced sweaters over bare torsos painted a portrait of a sensual, self-confident man who was perfectly comfortable with his imperfections. A character, in other words. When the world tires of Triple S sneakers, you could imagine young men looking his way.

And all the while, those sheets dried in the heat. Eventually, the models lined up in front of them, expectant, waiting for The Man…except out walked not Armani but a young guy with a charmingly awkward smile in a t-shirt that brayed Gorgeous Giorgio. For some stupid reason, I thought of “Spartacus”. “I am Giorgio.” “No, I am Giorgio”, etc etc. Maybe Mr A. was saying every man is a little bit Giorgio. Or at least he was hoping we would like to be, in one of those dreamy navy ensembles. He wasn’t completely off the mark either.