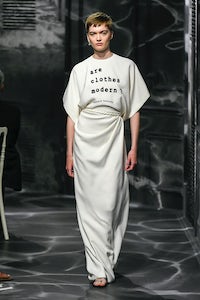 PARIS, France — “I could write a book about black,” said Christian Dior in 1954. Sixty-five years later, Maria Grazia Chiuri did just that, when she turned her couture collection into a symphony of sculpted shadows. Her own personal style has always tended to the Goth. “I am Generation Black,” she merrily declared as she contemplated the show line-up.

Chiuri was wearing a black kimono, a gift from a friend in Japan. It kind of fitted with the theme of her show: fashion’s relationship with architecture. “Abito(dress) comes from abitare (to live),” she pointed out. “Clothes are your first house.” In the same way that a couturier has a maison. Chiuri made that absolutely clear with the surreal little flourish that closed the show. Out walked a model encased in a gold-leafed simulacrum of 30 avenue Montaigne, Dior’s ground zero.

Her three years at Dior have been riven by controversy. Now it’s become clear that Dior has been Chiuri’s path to personal enlightenment. Everyone makes mistakes on such journeys. Of course, sanctimonious fashion trolls have absolutely no patience for that kind of growth process. But she is getting it right.

As usual, there was a guru to guide her through her new collection. This season’s was architect and social historian Bernard Rudovsky, who, in 1947 — the year Dior launched his New Look — curated an exhibition called “Are Clothes Modern?” at the Museum of Modern Art in New York. Rudovsky had an issue with fashion, high-heeled shoes especially. He favoured a classical toga style, simple, unstructured, accompanied by a flat sandal, which would bring the human form necessarily closer to nature.

Though it seemed typically counter-intuitive of Chiuri to apply such an anti-fashion notion to a collection of haute couture, she felt Dior himself was headed in that direction anyway in his last collection in 1957, when he showed styles that featured a toga-like drape. She took that cue and ran with it. “Classical shapes worked in a modern way with construction and material, decorated with super-light and super-fragile embroidery” is how she described what she set out to achieve.

Chiuri insisted the modernity lay in less cut, less construction. Day and night intertwined throughout the show. “I’m obsessed with the idea of comfort,” she said. “I understand myself more through Rudovsky. What I do instinctively comes from my background in Southern Italy, where there’s beauty and elegance, but it’s effortless.” Remember, the very first thing she did at Dior was to relax the iconic bar jacket, the nip-waisted silhouette that was the house signature. There were Bars galore here, no longer weighted with heritage. And the footwear was a sandal with a woven nylon stocking effect. So much less-ness. You want heels? There was a kitten on offer.

Christian Dior’s endorsement of black aside, Chiuri accepted that its preponderance in this collection might have something to do with her own origins and inclinations. But black wasn’t strictly black. If the severity of the heavily shaded eyes, the tight chignons and the veiled faces conveyed restraint, the various blacks — shaded, textured, lacquered to the oily sheen of a tanker spill — suggested that degrees of sensuality could co-exist with the severe. The Dior archives had coughed up a slew of inspiration for the mesh that covered decolletés and arms, or underpinned skirts. What is covered will eventually be revealed.

There was a louche disarray in one-shouldered cloque eveningwear, in the copper lamé thread creeping up a bias-cut sweep of black pleating, or in the feathers that curled all over a dress with matching capelet. There was even a hint of decadence in a stark black velvet shift embossed with a Fortuny motif. The model with her bobbed hair and glazed demeanour might have been an opiated party girl at a Venetian all-nighter in the 1920s.

They were peculiar fetishistic images from a designer who has made her Dior into a feminist platform. But remember again that Chiuri was thinking about couture as architecture, that each outfit was a kind of personal décor. The maison at 30 avenue Montaigne is closing soon for renovation. Chiuri seized the opportunity to engage feminist/surrealist artist Penny Slinger to transform the interior into a celebration of the women who’ve passed through the house: everyone from wealthy clients to the seamstresses who sewed their dresses. Slinger created an eerie, organic environment, slithering tree roots like a swanky hobbit’s burrow, with, here and there, caryatids, the statuesque female forms familiar from Ancient Greece. Not only were caryatids decorative, but they were usually holding up buildings.

The metaphor wasn’t lost on Chiuri. That's how she is working things out at Dior. “Fashion is my analyst,” she said with a hearty laugh. “Couture even more so.” And it seems like the more personal she makes it, the more it plays in the outside world.