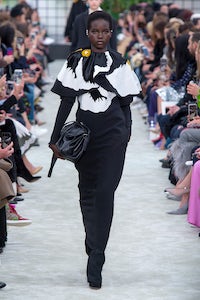 PARIS, France — Were there pearls on the soles of the shoes in the new Valentino collection? Maybe my eyes were playing tricks, but I wouldn’t have been surprised. It was the kind of wardrobe detail you’d expect from a princess in a fairytale. And Pierpaolo Piccioli has always been a master storyteller, never more so than with the fabulous couture collection he showed in January. That would be an almost impossible act to follow. Piccioli didn’t try. He took himself elsewhere for his ready-to-wear. Flowers. Huge, dramatic flowers. “They’re usually known as gentle and romantic, but I wanted to take away the fairytale connotation and make something strong.” His moodboard featured huge blow-ups of Imogen Cunningham and Robert Mapplethorpe’s photos of flowers, all pistils and stamens.

Still, the fairytale wormed its way back in. The soundtrack mixed Bjork’s faerie “Isobel” and Alexander Desplat’s music for the modern fairytale “The Shape of Water”. Red Riding Hood met up with her cousins Green, Blue and Black Leather Riding Hood on the catwalk. Darkly poetic Vittoria Ceretti had the makings of an evil queen in her stark dress. Then there were the flowers themselves, an enchanted garden, supersized on billowing skirts, enveloping shoulders, knitted into long, lean knitwear. Billowing aside, the collection essentially followed the long line floorwards, emphasised by the strong tunic-over-skinny-pant silhouette that dominated.

Piccioli said there were more conventional items like bombers and peacoats blossoming with the same extravagance in the showroom, but he chose not to present them, “because fashion has to be more fabulous”. One reason January’s collection was so… well, fabulous, was its update of couture excess with tanks'n'chinos access, which made it modern. It was disconcerting to find less of that modernity in Piccioli’s ready-to-wear, though the final look, a billow of black gazar topped by a band of black velvet, guaranteed a happy ending.