A Uniform Edge at Versus

Versus is courting millennials with a fierce hunger to define themselves as individuals. 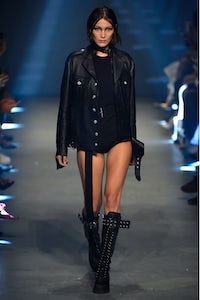 A Uniform Edge at Versus

Versus is courting millennials with a fierce hunger to define themselves as individuals.

LONDON, United Kingdom — Donatella Versace imagined the men and women on her Versus catwalk as boyfriends and girlfriends. To ram home the point, she had Gigi Hadid and Zayn Malik, fashion’s favourite young lovers, in her front row.

Smart move. Gigi and Zayn are exactly the sort of people the new Versus collection needs to be courting: Millennials with a sharp edge and a fierce hunger to define themselves as capital I Individuals. (What’s a tattoo but a way to announce Yourself before you even open your mouth?). Which means that, in Saturday night’s show, there was an irony in the fact that self-definition Versus-style had a strongly uniform edge – literally, in the sense of a khaki-driven military influence (repurposed vintage parachutes providing the source material for silky nylon coats, an MA-1 jacket elongated into a second-skin dress), figuratively because the girls are going to mirror each other in their LBD’s, and the boys are going to run into themselves coming the other way in a biker jacket and urchin pants (which was, by the way, a very appealing mesh of Hell’s Angel and hobo). But we are surely living in the most irony-proof era in history, so that observation means precisely nichts.

Far more preferable to reflect on Donatella’s success in reanimating the original street-y ethos of Versus. It’s twenty years since the diffusion collection launched as her very own baby. Anyone who was at those early shows in New York can’t forget their live rock/electro bang-shang-a-lang. (Bring back Les Rythmes Digitales, I say). The label’s latest outing went straight back there with a leather jacket and a pleated mini, the rockist flair of a scarf dress in a collaged silk print, the mash-up of khaki leather and black neoprene in Adwoa Aboah’s bifurcated sheath dress. And the girls’ shag cuts.

But Versus always had a techno flavour too. Here, Donatella reanimated Versace’s signature mesh in aluminium, lighter, cheaper than the original metal. If “authenticity” is truly a selling point now, then DV owns this look. The silvery little Diana the Huntress dress that Mica Arganaraz wore to close the show was one true-to-form option. Backstage, DV offered another, mesh top paired with denims slashed so that a lining of mesh peeked through. Seductive but alien, like Under the Skin.

Footnote: Donatella imported students from Central Saint Martins to work on the collection, some of whom are now full-time at the house. Whatever the Brexiteers imagined they were achieving, the potential death of this kind of interchange ought to haunt them to their graves.