Nothing could save Olivier Lapidus' empty reiteration of Lanvin’s legacy, hell bent on drumming home the house logo in every way, shape and form. 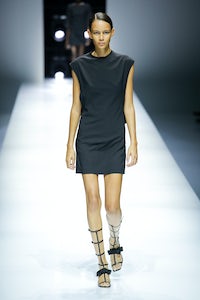 Nothing could save Olivier Lapidus' empty reiteration of Lanvin’s legacy, hell bent on drumming home the house logo in every way, shape and form.

PARIS, France — Lanvin: the house that Jeanne built — and the one that Alber Elbaz renovated for the 21st century — has stumbled on hard times. After the ouster of Elbaz at the hands of Lanvin owner Shaw-Lan Wang, Bouchra Jarrar took the creative reins, only to exit the label just 16 months later, leaving the ailing women’s wear arm of France's oldest fashion house in the hands of 56-year-old Olivier Lapidus, a man born and bred into Paris fashion (his father was fashion designer Edmond Lapidus, aka Ted). But from the moment his debut collection appeared on an elevated pearl grey catwalk in the Grand Palais — a room bereft of the industrial, cinematic spirit which Elbaz (and his talented menswear counterpart, Lucas Ossendrijver) conjured up so well — it was clear that Lapidus wanted to take Lanvin into an altogether different direction. Despite the immaculate casting, nothing could save his empty reiteration of Lanvin’s legacy, hell bent on drumming home the house logo in every way, shape and form.

Woven into jacquards, stamped down bow-strewn sandals and printed across zipped, boxy camera bags, the once discreet stamp of the house became a victim of outdated logomania. Indeed, the graphic came splashed all over this lacklustre collection of ill-fitting cocktail dresses, floaty backless tops and high-waisted pleated skirts. Where the logo was not present, fit was an issue, as seen in bombastic cocoon coats, puckered tuxedos and sheer camisoles in an unfortunate palette of black, white, lipstick pinks and an aquatic blue. Jeanne Lanvin’s name (doth she turn in her grave) appeared woven into grosgrain waisted shifts, her initials reprised as a brass hardware on a satchel or purse.

Upon Lapidus’ appointment this July, sources spoke of plans to transform Lanvin into ‘a French Michael Kors’, a strategy presumably aimed at growing the brand with lower price points and a new focus on accessories. What Michael Kors succeeds at, however, is constructing a luxurious image with his ready-to-wear shows, a necessary starting point from which to sell diffusion lines and handbags. Today Lanvin looked less expensive than ever.