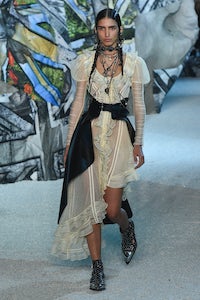 PARIS, France — Talking to Sarah Burton before she presented her spring show for Alexander McQueen on Monday night, I was gripped by a single overpowering thought: next time she heads out on a research trip, I want to go too. For this collection, she visited some of the most pagan places in Britain, absorbing their energies – the catwalk was dotted with standing stones — and translating them into magical clothes. I always thought Avalon was a place of myth. It actually exists as marshland, near Glastonbury. You can cross it, as Burton did, on narrow wooden walkways.

She had journeys on her mind, especially the way-stations of a woman’s journey through life: birth, christening, marriage, death, mourning… If the autumn collection brilliantly broadcast the individual strength of the warrior woman, Burton was now keen to communicate emotion, warmth, vulnerability. But if the clothes were softer, maybe more decorative, they were no less forceful. As Burton said, a woman designing for other women in this particularly trying moment would want nothing other than to reinforce the power of community. Maybe it’s only a certain kind of woman who can see herself in McQueen clothes, but anyone can recognise the obsessive conviction of Burton’s vision.

For one thing, it was in the details: the amulets and talismans draped round necks and across shoulders; the occult medieval emblems clustered on a long tulle dress; the dense floral embroidery, bringing the outside inside; the “mudlark” dresses, made up of filigree or jet recreations of the detritus dredged up by mudlarkers in the River Thames at low tide – bird skeletons, shells, thimbles, discarded tokens of urban life. It was intense, spooky almost. More so when Burton’s assistants backstage wheeled on an old wedding dress so ancient it looked like it had been recently whipped off Miss Havisham’s back. The dress had been photographed and made into a pale print lavished with flowers. Burton loved the idea of clothing with a memory.

It’s not exactly a new notion in fashion – Martin Margiela was big on it, Dries Van Noten still is – but no one else has the ability to deliver it quite the way Burton does. Here, it wasn’t only the ravishing beauty of the embroideries, like something conjured from the needle and thread of another dimension. It was also the way in which dress codes of other centuries – tailcoats, armour – were incorporated into outfits of surpassing beauty.

The first look was a leather blacksmith’s apron laid over a knitted lace dress. It was simultaneously hard and soft, and so fetishistic it made me wonder who responds to McQueen in the store, and how do they do so. “They see themselves as 'the woman,'” Burton replied. In which case, there is a world of wonder waiting for the McQueen woman in this new season.