Shown on five groups of girls, the brand's twisted classics struck a winning balance between newness and familiarity. 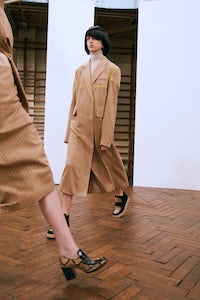 Shown on five groups of girls, the brand's twisted classics struck a winning balance between newness and familiarity.

PARIS, France — For Acne Studio’s Pre-Fall 2016 collection, Jonny Johansson said that he had wanted to look at the period of life when individuality is best expressed as part of a group. We all know that feeling when you need your sisters (and sometimes brothers) to feel safe enough to be who you want to be.

He admitted that he had fun cooking up the names of his gangs. There were the Fanzine Girls, who you “were afraid to approach without a deep academic knowledge,” and who only seemed to like one colour: beige. The Country Cool group showed an affinity for earthy colours, crushed velvet and a certain softness, while the Neo Acid Post Post girls were “DJ girls making post post pop art” in neon, nylon and fluid tailoring (you could totally see the look on someone like Italian it-girl Sita Bellan). The Kill Bill Plaid gang, on the other hand, would mix bouclé tartan with hand-painted checks and bonded skin-tight leather; according to Johansson they were into “emulating celebrities or movie stars.” Finally the Evil Teenage Squad was all about fire. The team had photographed a collage of strips of crepe paper and made it into a print, while a georgette dress had been hand-embroidered with a flame pattern, then beaded to create a play with light, an indication for Johansson of how far away from a “denim brand” Acne Studios is by now.

As a concept for a collection, it made it possible for him to show clothes that to some extent veered in five different directions, but still felt like they belonged together. There were also some recurring things, like the use of python and shearling, or the reimagined loafers (hooks, not buckles). But the overall feeling was one of Acne Studios sticking its fingers deep into the cool jar.

Judging by this outing, it obviously works for the brand, and the loafers are in a way a good key to the collection (even if Johansson was talking more fondly about the sandals). The twisting of classics is, of course, in itself, a classic design technique. But when it is done well, when it works, it manages to bring both newness and familiarity to a garment. This seems to be a core strength of Acne Studios. You’ve never seen these girl gangs in real life, and yet… it feels like you could have. 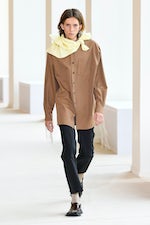 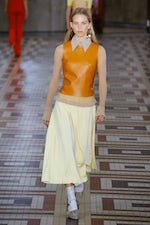 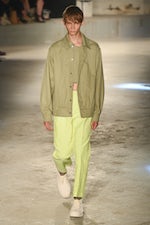 The Morphing of Garments at Acne Studios 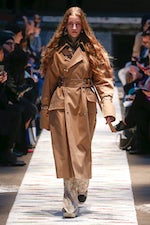 Acne Studios Heads to the Country