Six years after the designer's last couture show, Alaïa's peculiar fashion voodoo was tougher but still as irresistible as ever. 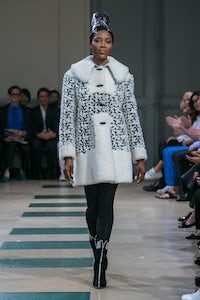 Six years after the designer's last couture show, Alaïa's peculiar fashion voodoo was tougher but still as irresistible as ever.

PARIS, France —  I was at Azzedine Alaïa's last couture show six years ago. I used the words “eerie timelessness” then to describe Alaïa's designs — and those of his high priestess Madame Grès. Why his timelessness should be eerie and not something easier to process, like “incontrovertible” or “desirable," seemed close to Alaïa's peculiar fashion voodoo. He is a cult, a world apart. There have been others like him in fashion – Charles James, Alexander McQueen to name a couple – but they crumbled under the weight of their peculiarity. Time was their enemy. Alaïa has made it his friend.

There were some people who walked out of his show on Wednesday night (which was, by the way, the literal definition of a hot fashion ticket, with its pressing throng outside, and the mercury rising inside) wondering why six years hadn’t incubated more “news." God gave them eyes that they might see. How silly they should deny Him.

Yes, some of the proportions and silhouettes were classic Alaïa, the knitwear was as ridiculously irresistible as ever and his feeling for the female form remains unimpeachable (and hardly something you’d want to change on a fashion whim). But Alaïa had also discovered decoration: serial embroidered motifs defined the new collection. They were stunning in their sophistication, like Moorish mosaics, but also super-sporty in a sweatshirt and skating skirt combo. Alaïa matched outfits to stockings and boots in the same print, a new wrinkle in the elongation of silhouette that is a signature.

One significant difference the six years had made was that this collection felt tougher, more urban. No feathers, no ruffles. More leather and metal. Alaïa is famously sensitive for reading women, elevating them. Here, the headdresses (the most glamorous saran wrap in history) suggested his queen was Nefertiti, the woman who ruled Ancient Egypt at its pinnacle of power. Naomi Campbell made a spectacular modern incarnation. It’s a moment when fashion desperately needs images of powerful women. Alaïa provided them.