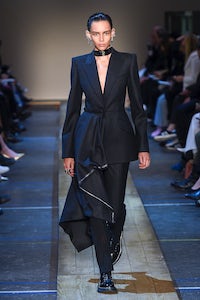 PARIS, France — One of the absorbing issues of the age is identity. Who am I? Where do I belong? Sarah Burton has spent a while placing her work for Alexander McQueen along the length and breadth of the British Isles. This season, she decided it was time to iris in on her own story. Burton was born in Macclesfield, in the North of England, in the midst of the mill towns that produce some of the finest fabrics in the world. She went to school in Manchester, at a time when that city was a pop cultural crucible. She has her own tale to tell, outside the overweaning narrative of McQueen, and the way she chose to tell it yielded a challenging, breathtaking show.

The first look was Binx Walton in a trouser suit carved from a bolt of fabric with the selvedge deliberately included as a detail. MADE IN ENGLAND. In a sense, this was the ordinary exalted, made extraordinary. “Craftsmanship which makes you feel powerful without being embroidered or embellished,” Burton agreed. And the fact that such craftsmanship still exists was her inspiration. Her collection highlighted the capabilities of British fabric mills, at a time when the country’s ability to serve the world has been placed under heavy manners by the Brexit-induced prevarications of idiot politicians.

You could maybe read the gorgeous taffeta confections worn by Adut Akech and Anok Yai at the end of the show as exploded roses, a reminder of another moment when England witlessly tore itself apart (I’m talking about the 15th century’s War of the Roses). And maybe Burton wouldn’t even dispute you on that. But closer to her heart was the spectacular, linear tailoring, reminiscent of the pride her dad took in being dressed in his suit, and the groundedness of that in the working class culture she grew up in. You don’t have to be a man to feel powerful in a suit, Burton was saying. Vittoria Ceretti’s jacket slid sideways into a flower of fabric that trailed away into the grandly imperious gesture of a train.

But there was also Burton’s innate humility in the collection: a pure white poplin shirtdress, a raw-edged cotton look with a mass of fabric bunched at one shoulder to form a ragged rose, a skirt with a floral design shaped by selvedge offcuts on the factory floor. You don’t really want to go there with the punk thing but it is a massive part of Northern culture and soundtrackist John Gosling did include a string version of Joy Division’s “She’s Lost Control.” Again, the notion of transmutation. The ordinary made extraordinary. The alchemy of life. Sarah Burton cast the spell brilliantly.