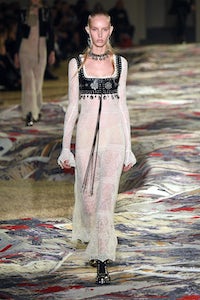 PARIS, France — Credit photographer Jamie Hawkesworth. He went to the Shetland Islands, off the north eastern coast of Scotland, to shoot a McQueen campaign, and designer Sarah Burton followed along with her team. And there they fell under the spell of the last whisper of land before the United Kingdom dissolves into the North Sea.

It was a location made for a McQueen story: rugged, primal nature, pagan past and centuries of arcane handcrafts, like the incredible Shetland lace, woven so fine that a shawl can fit through a wedding ring. Burton cut it into long gossamer dresses, embroidered with ancient Celtic symbols, like the Tree of the Life and the Spirit of the Wave.

The models would have looked like virgin sacrifices for a cult, except that Burton dramatically grounded them with barbaric leather harnesses or thick belts trimmed with tiny bells, and heavy, studded boots. Other dresses artfully interwove the lace with Fair Isle knits, which were also patchworked on their own into an impressive sweater dress.

It’s always artful technique that is the crux of a McQueen collection, like the leather jackets here, exquisitely hand-painted and embroidered. But sometimes there’s only artful technique, so it was gratifying that there was such a potent sense of Burton’s own emotional engagement here, not just because Scotland is such a strong strand in the McQueen DNA, but because she herself was so taken with the women in their cottages tatting and weaving away like generation after generation before them.

Lee McQueen was a fiercely tribal creature, but Burton’s take on the same instinct was a more benign sense of community. The set today was an undulating carpet made up of 240 smaller patched carpets, two of which are traditionally sewn together after a wedding as a token of the newly united families.

Burton talked about the new collection as “a celebration of the studio and unity and what we’ve all been doing together.” Nice boss! That sweetness shone through in a puff-sleeved, flower-strewn dress in handkerchief cotton. “Not chiffon,” Burton insisted. “Not precious.”

Maybe not precious, but her appetite for drama was as insatiable as ever. That sweet cotton dress was haltered in studded black leather. And the finale was a sensational swirl of netting, strands of jet beading, waves of silver sequins, culminating in a huge froth of tulle, like seafoam. In Celtic legend, it was mermaids who protected the Shetlands. These were Burton’s eerily beautiful mermaid dresses. Wicker Man, beware!