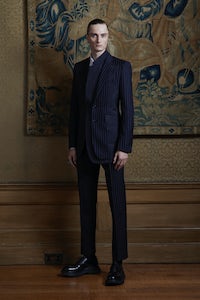 8 View Collection
Fashion Week
Share
Comment
BoF Professional Exclusive
By Tim Blanks June 10, 2019 17:03
Share
Comment
By Tim Blanks June 10, 2019 17:03
LONDON, United Kingdom — The disconnect between McQueen’s collections for men and women weighed heavy long before Lee left this world. The poetry of the womenswear has often been so transporting that you were left wishing the house would offer a worthy male counterpart. With this new season, the sensation was stronger than before that Sarah Burton was actually looking to do just that. In her spring collection for women, she referenced her own background in the North of England by using suitings produced by some of the most famous fabric manufacturers in the world. She returned to those mills for the razor-sharp pinstriped tailoring of her new men’s collection. And then she resuscitated the grey mohair which Lee loved (his Tippi Hedren/Hitchcock collection being a case in point) for a suit that sported a half-kilt, more edge than ever.
But the most striking outreach was Burton’s recollection of the research trips she and Lee made to Japan in the 1990s. A calligraphic flower blooming across a white cotton shirt, the same flowers woven into the jacquard of a suit, or the black ink bleeding like a Rorschach blot across a pure white field were the kinds of effects that duplicated the violent beauty of vintage McQueen. The effect was more benign in an engineered print of kaleidoscopic psychedelia on a leather coat, like watercolour soaking into the skin. But still, the lingering impression was the same kind of slightly unhinged technique that makes Burton’s work on womenswear so crazily seductive. That might even have been the inspiration for a black coat built from ruffles of upcycled scraps from the studio. Ornate and sustainable — there’s a modern notion for you.