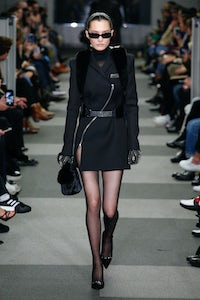 NEW YORK, United States — Enter the office high-rise, escalate to the headquarters of AWG, take a seat in Cubicle B, observe the stomping marchpast of the boss ladies. Alexander Wang’s take on power dressing in the era of #timesup was that literal. The backdrop was the old Condé Nast building in Times Square, where Wang interned at Teen Vogue a hundred years ago. But if there was any sentiment involved, it was buried in pragmatism. “I actually go to work more than I go to party,” said Wang, in a rebuttal of anyone who persists in seeing him as the pleasure king of Wangfest. “I wanted to showcase that part of my experience.”

On this showing, it looked like Wang’s work experience had introduced him to a posse of real CEO shitkickers. He moulded them into second-skin LBD’s seamed with zippers, or hiked-to-here leather skirts, or equally ferocious workout wear. “Just because she’s tough, doesn’t mean she can’t be playful,” Wang insisted. So the sports bra was trimmed with mink, and the sweatsuit was also swathed in mink, “platinum-dyed”.

The “playfulness” of that particular notion aside, the rest of the collection had a steeliness that bordered on the kind of cliché that was sealed for eternity by Robert Palmer’s all-female backup band in his video for Addicted to Love. Bug-eyed in shades, for a start. Monochrome. Not just zippered, but grommeted. The edge was as hard as hell, like the soundtrack. How right was that for society’s current retributive mood? Maybe appropriate, but not particularly winning. The collection offered no escape. That, in itself, might have been the only comment necessary: RESIST!