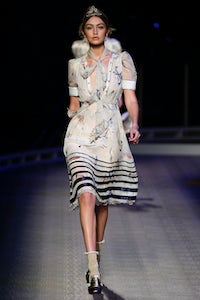 NEW YORK, United States — For Tommy Hilfiger, treating fashion as a form of entertainment is nothing new. He’s been doing it for 15 years, inviting musical talents like Pharrell to perform at his show long before “livestream” hit the mainstream. This season was no different. The season’s great big theme was nostalgic nautical, so the designer constructed a giant cruise ship — aptly named the T.H. Atlantic — smack in the middle of the Park Avenue Armory.

Select audience members, meaning influencer and blogger-types, were invited to sit on benches in front of the ship that faced the rest of the crowd. Top Instagrammers, on the other hand, were positioned in the "Instapit," a special section that promised optimal shots of the runway, especially Hilfiger ambassador-and-collaborator Gigi Hadid, as she opened the show. (Hadid would grace the audience with her presence not one, but two more times.)

To top it all off, the brand teamed up with industry app GPS Radar to offer check-in to the show and access to runway images on Apple's Watch. (This devotee to the device chose to bring along her hardcopy invitation anyway.) Minutes after the finale, an email hit the inboxes of attendees with a link to detailed information on the show. Pretty slick.

Next season, the company will take it all one step further, selling its TommyxGigi collection straight off the runway. In February 2017, the entire Spring collection will be immediately available to purchase.

The coming shift to direct-to-consumer shows made this season feel like a moot point in many ways. But it was still good marketing, selling the idea of Tommy Hilfiger if not the actual clothes.

Michael Jackson’s “Don’t Stop ‘Til You Get Enough” floated over the models, as they walked around the cruise ship with real purpose. They were mostly clad in 1940s-inspired tea dresses in whimsical floral and nautical prints, an extension of the designer’s Pre-Fall collection, and adorned in princess tiaras for a bit of girly flair.

White sailor stripes decorated a black leather trench; a cropped navy velour sweatshirt was embroidered with seafaring motifs. There were sailor-collar tops, embroidered tap pants and plenty of prettily puffed sleeves. A trench coat was decorated with a cute cluster of broaches, and many looks were worn with disco-prep gold lamé loafers. The problem, of course, was that much of it looked like a costume fit for cosplay — too many nautical details, not enough subtlety. That’s fine when you’re selling a dream. But when you’re selling clothes, there needs to be a bit of nuance. Here’s to hoping that, next season, Hilfiger gives his fans something to not just Instagram about, but to buy. 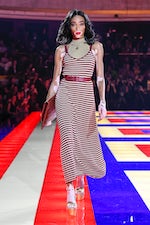 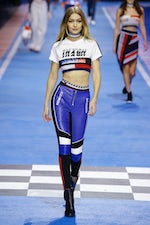 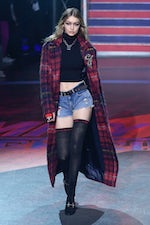 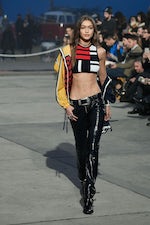