All Hail the Celine Man

Hedi Slimane is up to his old tricks. His first menswear collection for Celine was desirable, but inventive it was not. 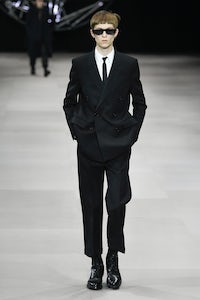 All Hail the Celine Man

Hedi Slimane is up to his old tricks. His first menswear collection for Celine was desirable, but inventive it was not.

PARIS, France — On Sunday night in Paris, Hedi Slimane finally unveiled his fully-formed vision of the Celine man. The press notes read: "Celine 02: A London Diary. Polaroids of the British Youth." Nothing more.

Regardless of which house he is leading, Slimane sticks to his guns, delivering a stream of very personal tropes. His focus is so sharp and so stubborn, you almost get the feeling that he is creating costumes for a period play or a movie, instead of designing clothing, so to speak. Rather, he goes for an attitude, reproduces it out of the sources and dresses it up. It happened once more with the Celine show that closed the men’s fashion season in Paris. But it very well could have been Slimane’s Dior Homme, or the more formal moment during his tenure at Saint Laurent.

Yet, for all the déjà vu, for all the square shouldered coats and biker jackets and high waisted pants which you might also find at a second-hand or thrift store, and despite the indie music soundtrack, the cast of skinny androgynous models marching at a furious speed, and despite the ambiguity of those hands plunged in the pockets looking more Stephanie of Monaco than Left Bank rebel with a stone in the fists; yes, despite using all of the tricks that Slimane has used for most of his career, it all felt fresh — and suddenly, desirable once more, just like the old fashion adage: everything old is new again.

The silhouette, at once sharp and roomy — at least by Slimane's standards — with trousers cropped mid-calf, created an unexpected play on proportions; the show venue was big black box with a unobstructed view of Place de la Concorde and the Champs Elysées through a glass wall. So, fresh as the nth take on Mods, of course. The imagery Slimane was after in this collection was exactly that. Rumour has it that the designer has moved his studio to London, which might explain the shift to the iconic British subculture as inspiration.

Slimane’s love for youth is eternal, and in envisioning the Celine man he drew a picture of a well-to-do, decidedly bourgeois type with some rebel leanings and a family palazzo as a back up. It’s an old story, but one that still works, and it made for some achingly cool tailoring and some seriously covetable coats.

Sellable it was for sure, inventive it was not. True creation is not high on the fashion agenda at the moment.