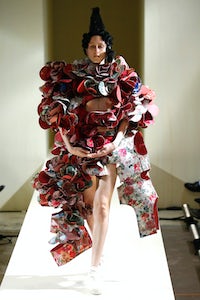 PARIS, France — “18th Century Punk,” was the opening gambit in Rei Kawakubo’s prepared statement about the collection she showed on Saturday. “The eighteenth century was a time of change and revolution. This is how I imagine punks would look like if they had lived in this century.”

Kawakubo has never been so explicit about her inspiration. But her relationship with the punk spirit as it was communicated by the physical and philosophical extravagance of Malcolm McLaren and Vivienne Westwood’s clothing has been one of her most enduring and rewarding. And her empathy with their radicalism has helped define Comme des Garcons as the foremost challenge to fashion orthodoxy.

Which is why her collection today was initially something of a surprise. The 18th century had punks, the punkiest punks of all time, the lowborns, the guttersnipes, the sans culottes who herded aristos to the guillotine during the French Revolution.

But Kawakubo’s vision of 18th century punk was more of the salon variety, like the sans culottes had torn the curtains from Versailles’ windows, the fabric from the palace’s sofas, the garments from Marie Antoinette’s closets, and reconstituted them as a parody of court dress.

And that was where her idiosyncratic notion of punk insinuated itself. Courtly tropes — panniers, hoop skirts, brocades, bustles, corsets, elongated sleeves and any element of dress that interfered with normal function (because normal function was precisely what courtiers could/would not demand of their garb) — were ruthlessly dissected into extravagantly useless articulations.

And there could be no outfit more ineffective than Kawakubo’s closing look. A hillock of ruffles, six feet wide if it was an inch, edged its way cautiously down the catwalk. The 18thcentury, one hundred years of political and philosophical ferment, was stilled into stasis. Destruction of the status quo? Nothing beats it.

But Kawakubo is much too canny a social observer to fall for something that wholly obvious. When she spoke of 18th century punk, she was surely aware of the precursors to revolution, the ridiculous popinjays called Macaronis, whose extreme fashion inflamed the populace, and made it that much easier for the guillotine to begin its bloody work.

The soundtrack played decadent tinkly sounds, xylophone versions of cancans and sugar plum fairies, but that only heightened the genuinely aggressive edge to the sugary, flowery mounds of fabric that walked by. Kawakubo showed floral armour in her last men’s collection, which, at the time, seemed like a statement about peace prevailing.

Here, armour became armadillo, with jutting breastplates, scales of fabric, silhouettes extended into stegosaurus spines. Make war, not love! The clothes were carapaces. I kept thinking of Kafka’s Metamorphosis. You could go to sleep one night and wake up as a warrior, whether you wanted to or not. Julien D’Ys provided the helmets for your first battle — Macaroni wigs twisted into Weeknd or Basquiat dos. 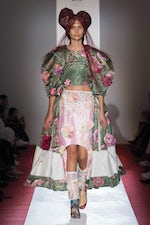 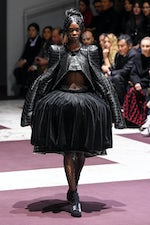 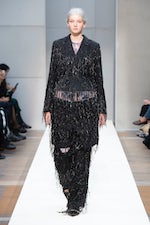 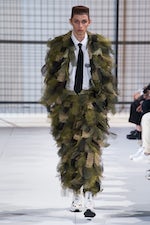