An Origin Story at Comme Des Garçons Homme Plus

Rei Kawakubo's collection was possibly one of the most provocative propositions ever from a designer who has made a career of them. 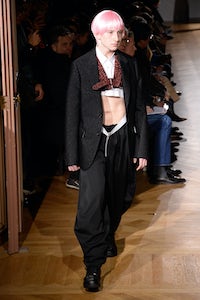 An Origin Story at Comme Des Garçons Homme Plus

Rei Kawakubo's collection was possibly one of the most provocative propositions ever from a designer who has made a career of them.

PARIS, France — Friday was child’s play at the men’s shows in Paris. Riccardo Tisci claimed his collection was “through the eyes of a child." And Rei Kawakubo distilled her latest offering to one word, “boyhood”, possibly one of the most provocative propositions ever from a designer who has made a career of them.

What comes to mind with boyhood? Uncertainty, questioning, exploration, transition, impatience, mystery, any of which make it an ideal subject for Kawakubo. She launched her men’s label as Comme des Garcons Homme Plus. Boyhood is a little like Homme Minus, back to the source. An origin story, in other words.
There was something of that here, the exceptionally young models in candy-coloured wigs like manga versions of the super-children from Village of the Damned. When you question masculinity, the obvious question is “What makes a man?”. And the equally obvious response is this: the child is father to the man. With that notion in mind, Kawakubo’s collection took on a curious caste. Maybe it was that Village of the Damned thing, but there was something sinister about her story. The clothes themselves — the re-proportioned jackets and pants, the elegant asymmetry, the layering, the arcane fabric treatments – were signature Comme.
In Dover Street Market, they will work their magic as perfectly adult individual items, divorced from the peculiarity of the presentation. But in the context of Kawakubo’s show, it was almost as if her boys were demonically possessing adulthood, rather than growing into it. A proper windowpane-checked jacket and waistcoat burst into turquoise choochoo trains in extruded rubber. Air Force 1’s sprouted rubber dinosaurs. Toys turned invasive, boyhood bared its fangs. As well as being fashion’s favourite radical, Rei Kawakubo is also its most penetrating psychologist.