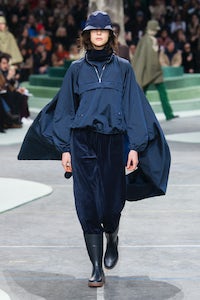 PARIS, France — Felipe Oliveira Baptista continued on his steadily upwards arc as a quiet force in fashion with a Lacoste collection that interwove an unsung chapter in the brand’s history with the social and environmental challenges currently facing the planet. During WWII, Rene Lacoste and his wife, the champion golfer Simone Thion de la Chaume, planted thousands of trees around the golf course of Chantaco in the Basque country. To do the work, they hired dozens of local people who, designated as forestry workers, were saved from deportation for forced labour in Nazi Germany. Humanitarianism, protection, nature…Baptista found a contemporary co-relative in a partnership with the International Union for Conservation of Nature, not only creating ten new polo shirts with the Lacoste croc making way for ten particularly endangered species, but also designing ten looks incorporating the creatures for the show.

They were naturally the finale: the vaquita porpoise all over a sporty shell suit, New Zealand’s kakapo parrot woven into a houndstooth two-piece, the Javan Rhino imposing on a tapestry top, and so on. It was an honourable and, on the whole, successful gambit.

Elsewhere, the collection itself wasn’t one of Baptista’s strongest. It was ​undermined by an Eighties undercurrent, not usually a problem at Lacoste (a brand which thrives on its past) but here slipping away in pallid corduroy, oversized denims, elasticated waists and computer game knitwear graphics (golf, actually). The show notes highlighted the enormous amount of technical ingenuity in the clothes. Unfortunately, it didn’t make them any more desirable. Fortunately, on the other hand, Baptista’s commitment to the IUCN did yield dividends. You lose some, you win some.