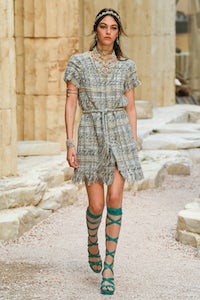 PARIS, France — “Reality is of no interest to me,” was one quote from Karl Lagerfeld in the notes that accompanied Chanel’s two presentations of its cruise collection in Paris on Wednesday. And yet the theme, "The Modernity of Antiquity," with its celebration of Greece as the cradle of Western civilization  — and, by extension, the birthplace of democracy — couldn’t be more topical in the light of the French elections. The beauty of the collection could also be read as a riposte to the ugly strains of bigotry and prejudice in large at the world right now. If fashion isn’t exactly a weapon, it can work quite well as a rallying point.

And that’s why Lagerfeld was smart to remind us that the seeds of the future are sown in the past. His March show ended in a very convincing rocket launch. Between Wednesday’s presentations, he made a trip to the studios of Radio France, where he spoke to Thomas Pesquet, the French astronaut who is currently coming to the end of a six-month stint orbiting the Earth in the International Space Station. No wonder “reality” is of no interest to Lagerfeld. One minute he’s speaking to a man in outer space, the next he’s in Ancient Thera. That unique dichotomy was, said Chanel president of fashion Bruno Pavlovsky, a reflection of the company’s commitment to strong storytelling. “Taking the codes of yesterday and projecting them into the future with surprise and daring,” was how he described it.

There was nothing approximating a rocket launch on Wednesday, but that didn’t mean there were no surprises. Or maybe it was just that the straightforwardness of the collection was something of a revelation. Against a backdrop which suggested an archeological dig on a Greek island – Delos? Santorini? – Lagerfeld paraded airy, artisanal tweeds, Delphic-draped dresses, classically pleated skirts and pants. Sinuous knitted terracotta-toned sheaths suggested ancient amphorae. All the classical flourishes were delicious: shoes heeled with Ionic columns, Athena’s owl embossed on Arizona’s purse, appliques of gilded laurel wreaths, gold coins dotting a caftan. And Michel Gaubert’s soundtrack of Greek musical modernists – Aphrodite’s Child, Vangelis, Iannis Xenakis – struck a transporting, ceremonial chord.

But it was a measure of Lagerfeld as a canny commercialist that the collection justified its existence in such a fundamental way. Cruise? Try a midnight blue jumpsuit with wide, pleated legs. Or creamy knitwear, casually knotted at the waist with rope. Or sheer plastic kimonos draping bathing suits. (Given Lagerfeld’s track record with fabric trickery, it was probably much too banal to assume it was actually plastic.) Yacht ahoy!

“We’re one of the only brands whose business model is based on fashion,” said Pavlovsky in our pre-show interview. “We’re not about building a trap of digital or whatever. Our customers want to feel something which is authentic, which is about Chanel, so we have to protect creativity and not take the easy way of giving everything to everyone.” In light of which, it was a pleasant surprise that one of the selling points of Wednesday’s show was the seductive accessibility of the clothes, and whatever that may say about Karl Lagerfeld’s state of mind in his twilight years. “Everything we do is about the future,” declared Pavlovsky, firmly herding the elephant in the room into a tight little corner. “Chanel is Karl, Karl is Chanel. It’s been a love story for 30 years and it will continue for a while.” And to that, we can only say, Zeus Alors!”