The wildly optimistic offering was everything we’ve come to expect from the designer, but she brought a new womanly worldliness to her work. 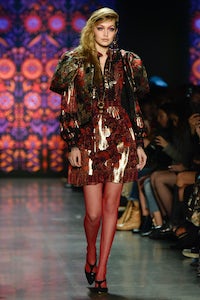 The wildly optimistic offering was everything we’ve come to expect from the designer, but she brought a new womanly worldliness to her work.

NEW YORK, United States — It was coincidence that Anna Sui showed a collection inspired by American fashion in the early 1960s just as an exhibition devoted to designer Norman Norell opened at the Fashion Institute of Technology. Or was it? Sui’s instincts have often anticipated a bigger fashion picture, and it’s about time for a fresh look at that period, not just Norell and peers like Donald Brooks, Pauline Trigere and James Galanos, but the work of illustrators Antonio Lopez, Anne-Marie Barden and Kenneth Paul Block. They were all contributors to Sui’s fashion education, as she graduated from Mademoiselle and Seventeen to her mother’s Vogues and Bazaars. That’s when she fell in love with the fantasy of 7th Avenue. That’s why she called her collection Beloved.

It was a wildly optimistic offering, clotted with colour, pattern, texture and an orgy of extravagant, charming detail, from the branded beanies and scarves and the coloured fishnet tights, to the sequined collar on a floral print blouse or the glitter elastic trimming tennis dresses. In other words, everything we’ve come to expect from Anna Sui. But the surprise here was how much her inspiration gave her to work with. The Burt Bacharach soundtrack seemed the ideal accompaniment for a vision of early 60s sophisticated cool, until Sui’s colour palette exploded that notion. It was eye-popping, almost psychedelic, with deep reds, hot pinks, blue and teal, purple and black-and-white paisley. But when she rolled out the gilding — jacquards shimmering like dragonfly’s wings on Gigi Hadid, with Garren’s hair and Pat McGrath’s makeup compounding the glamour — she brought a new womanly worldliness to her work.

She said one of the things she loved most about Norell was that he had no airs and graces. He would rather hang out at Schrafft’s with his staff than go to swanky restaurants with his clients. Sui may realise huge, shiny dreams on her catwalks, but she too is humble. All she wants to do is share her love for what she does. And nobody in New York shares it better.