A Hippie Afterglow at Anna Sui

The designer nailed what's still poignantly irresistible about the genesis of the Sixties counter-culture. 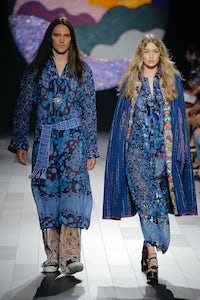 A Hippie Afterglow at Anna Sui

The designer nailed what's still poignantly irresistible about the genesis of the Sixties counter-culture.

NEW YORK, United States — You know the way it is with Anna Sui. She gets all inspired by a TV show about the Bronte sisters, then she sees an exhibition about hippie handcrafts, then she has a psychedelic moment at the Pink Floyd exhibition in London, and before you know it, she’s once again obsessively whipping up a new world that defies description as it inspires awe, populated by drag god Hibiscus of the Cockettes, and Native American artisans and San Fran longhairs the Quicksilver Messenger Service, and a Japanese man who spent his life collecting bits of tie-dye which Levi’s eventually acquired and passed on to Sui. My gratitude that she exists in New York is boundless. Her shows are never anything less than a joy, in a week which can often be anything but. But this new one had an additional subtext.

The hippie dream was an idealistic flicker, doomed to disillusionment by the predictable inadequacies of human nature. But that flicker of idealism left an enduring afterglow, a pale vision of a more caring, sharing culture. Allow yourself a hollow laugh if you will, there’s still something poignantly irresistible about the genesis of the Sixties counter-culture. Sui nailed it. Her show opened with a recreation of a video she’d seen of a commune called the Love Family. Led by a gilded Gigi Hadid, her entire cast of models – as well as a child or two – paraded with stately ceremony around the venue, bathed in an eerie blue-ish light, like a glimpse of an alien culture that has faded out of time.

Then they returned, in full Technicolor, men and women alike, embroidered, hand-painted, tie-dyed, glittered, fringed, beaded, braided, bangled. The lacy, Empire-lined primness of the Brontes mingled with the blurry psychedelia of the flower children, all of it belted in tapestries “woven in the villages of the Peruvian High Andes” and anchored in appliqued, vegetally-dyed footwear by Bed/Stü, artisans Sui found in Mexico. It was a spectacular reflection of the designer’s conviction that the main reason retail is dying is because businessmen have replaced merchants.

“If I had a store, I would want it to be like a bazaar,” she said, “where you’re going to see clothes you’ve never seen before, or familiar things made new.” It would be reassuring to think that this collection presages a Summer of Love in 2018. That unlikely event aside, Sui is at least offering the best fashion trip this side of the Haight.