What this show emphasised is that there is a kind of delirium at work in an Anna Sui show. She is a real fashion auteur. Now if only the rest of the world saw that. 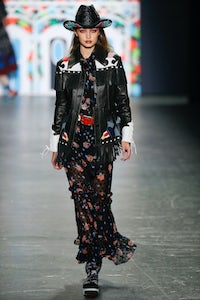 What this show emphasised is that there is a kind of delirium at work in an Anna Sui show. She is a real fashion auteur. Now if only the rest of the world saw that.

NEW YORK, United States — Anna Sui spent the summer working on a book that will go with her upcoming exhibition in London’s Fashion and Textile Museum. (Full disclosure: I helped her.) The flick through her back pages made her reflect on facets of American folklore that fascinate her: cheerleaders, cowboys, Hollywood, sailors, Pennsylvania Dutch, folk art in general.

Memory lane also reminded her of why she was drawn to fashion in the first place, how she’d head to the thrift shops of hometown Detroit to create looks for herself based on what she’d seen in magazines.  Those shops don’t exist anymore, sucked up in the phenomenon of “vintage dressing”, but Sui wanted to pay tribute to them. And when she matched that impulse to her interest in folk art — revived not just by her book research but also by a couple of recent exhibitions she’d seen in New York — her Spring collection fell into place.

Against a painted backdrop of an antique dollhouse, Gigi Hadid opened the show in a rose appliqued black leather cowboy jacket produced in collaboration with South Paradiso. This Californian company inherited the legacy of East West Musical Intruments which made custom orders for the likes of Elvis, Hendrix, Janis. Once again, we celebrate Sui’s obsessive, fangirl completism. In this collection, it wasn’t just East West. The outfits that used kitsch souvenir scarves as a starting point — the sparkiest items in the show — were inspired by a Toscani shoot for Vogue with model Donna Jordan from the early 1970s. Sui owns Jordan’s scarf from that shoot.

That kind of archival detail makes Sui unique. Her fascination with the past fertilises the richly layered, textured collections she produces in the present.  As usual, it was hard to pick out details in the rapidly passing fashion parade — even harder than usual because there was so much cross-pollination between ideas and eras, between cowboy fringing and rahrah skirts and diaphanous chiffon smocks, the lushest thrift shop in history.

Gigi’s kid sister Bella showed up in a floorsweeper based on a pioneer’s coverlet topped with an East West leather poncho-lette. The designer had watched a Jean Harlow festival on TCM. That put her in mind of peignoirs and marabou-trimmed slippers. What looked best with them? A slip dress or a souvenir t-shirt? Sui showed both.

What this show in fact emphasised is that there is a kind of delirium at work in an Anna Sui show. She is possessed. But by any definition the individuality and consistency of her vision marks her as a real fashion auteur. Now if only the rest of the world saw that.