With price points inevitably rising — Sui said a designer with her inclinations might as well go for broke. Every dime she spent was on the catwalk — and it looked even better than that. 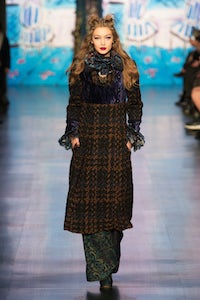 With price points inevitably rising — Sui said a designer with her inclinations might as well go for broke. Every dime she spent was on the catwalk — and it looked even better than that.

NEW YORK, United States — One of Anna Sui’s influences this season was the 1945 movie version of Noel Coward’s comedy Blithe Spirit, lensed, said the ads at the time, “in blushing Technicolor”. The film’s theme — the trouble you can get into when you commune with ghosts — seemed curiously appropriate to Sui’s state of mind for Autumn/Winter 2017. She’s always chased the spirits of the past — the more fabulous the better — in her collections. “But this time, I don’t know what got into me,” she said gleefully. “It was never this intense.”

Her list of inspirations was as arcane and dazzling as ever: Elsa Schiaparelli, Christian Berard, Salvador Dali, Jean Cocteau and a character named Countess Dorothy di Frasso, who lived in splendour in Beverly Hills in a house designed by Elsie de Wolfe.

They were all players in the same hectically creative scene in Paris in the 1930s. “I loved the camaraderie,” said Sui. “We could use more of that these days.” And yes, that was a political dig. “It’s a total political statement,” she agreed.  If Sui’s last collection drew on everything she loved and missed about America, things that she felt were being lost in a polarising shuffle, this time, she focused on something she missed even more: the glamour, the decadence, the opulence of an era she and her friends were fixated on when they were growing up, a world now well and truly gone.

Yves Saint Laurent was equally fascinated by that world, and Sui’s collection played out a little like a refraction of his refraction. Saturated jewel tones — ruby, magenta, emerald, peacock — dominated. Blouses cut from gold-plated lace gleamed underneath lush fur (faux and fox) chubbies. The fabrics were lavishly worked, like satin devoré over lamé, or over-printed jacquard silk.

The silhouettes had an opiated languor, suited to the party people of pre-war Paris. In its extravagance, the collection was a deliberate rebuttal of 21st century athleisure. Sui misses the New York when everyone got dressed up to go out at night. Still, she was sly and savvy enough to include her own take on a tracksuit — in panné velvet with a metallic stripe down the side.

Her love of divine decadence aside, there was a practical impetus for Sui’s gilt trip. She said that everything is costing so much more today — with price points inevitably rising at the end of the process — that a designer with her inclinations might as well go for broke. And, in terms of perceived value at least, it worked this time. Every dime she spent was on the catwalk — and it looked even better than that.