Seeming randomness is an Anderson signature. But those wayward touches lead you to the mind — and the hand — behind the enterprise. There are no accidents. 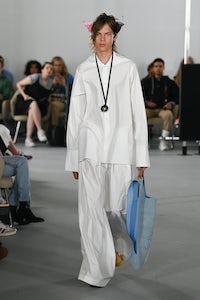 Seeming randomness is an Anderson signature. But those wayward touches lead you to the mind — and the hand — behind the enterprise. There are no accidents.

PARIS, France — Never have we been so bombarded by the word “fake.” Even the evidence of our own eyes is slammed by opportunists and charlatans as “fake.” No wonder, as Dries Van Noten pointed out the other night, that fashion — conventionally considered a reflection of the world — has taken to rejecting it. Jonathan Anderson’s new collection for Loewe was a sublime gesture of refusal.

He imagined his men as romantic young nomads, moving through a dreamscape. “Nymph-like,” he called them, with their fluttery little feathered ear-pieces. Danny Elfman’s theme from “Alice in Wonderland” soared on the soundtrack, an aural cue to the kind of alternate reality Anderson had in mind. At the same time, he insisted he wanted this light, fantastic kingdom to be Loewe’s reality for the future. “They had their big moment in the 1970s,” he said. “I wanted to go back to that moment when the brand became something.”

Then, the brand was rooted in a solid Spanish bourgeois ethos. Madrid was its heartland. Anderson has transformed Loewe’s fortunes by swivelling the geographic dial a little eastwards, to the Balearics. The lotus-eaters of Ibiza, where he spent a lot of time with his family as a child, have become an inspiration. And Anderson’s resuscitation of Paula’s, the boutique that dressed them, is now an extremely successful sideline for Loewe.

If the free, fanciful style of Ibiza in its idealistic heyday has influenced Anderson’s Loewe, this collection broadened the canvas. We know he is obsessed with the arcana of craft and character. I imagined him making an easy connection between Ibiza and the free spirits who turned Tangier into such a hotbed of wayward creativity. At least that injects djellabas into the equation. The long, flowing Moroccan robe worn over matching trousers (a new suit!) was the foundation of the collection — in cotton, in tablecloth linen and striped wovens and in a gorgeous suede, which was the best concession to Loewe’s history with hides that Anderson has made thus far in his relationship with the brand.

The floorwards flow of the djellaba shaped the personality of the collection in other ways. Volume, for instance. Everything felt big and effortless: an elongated cotton tank and slouchy handknits, dungarees, an epic denim suit, overshirts and trousers that billowed like sails.

Tangier suggested itself when Anderson showed a striped robe topped with a gold-buttoned navy blazer. This combination of cultures made me think of the writer Paul Bowles, the American-in-exile who was the unofficial mayor of Tangier. There was a sailor suit in the collection’s expanded style that also put me in mind of a port city. The model was wearing tiger moccasins. Such seeming randomness is an Anderson signature. A little later, there was a latticed knit that was constructed in the most haphazard way. But those wayward touches lead you to the mind — and the hand — behind the enterprise. There are no accidents.

Anderson said he wanted “to slow everything down” which was why he chose John Maus’s “Hey Moon” to close the show. The languor fitted the dreamscape he desired. The equally languid silhouettes made a major contribution too, but clothes very similar to these are the reality in cities around the world, a rebuttal of the very idea of “fake” and scarcely the stuff of escapism. Maybe Anderson wasn’t really thinking about Wonderland. He studded his catwalk with monitors relaying videos by artist Hilary Lloyd: a parrot, an Easter bunny, an alien plant, some abstract snippets. Not fantastic at all, but emblematic of another way of looking at the real world. Acceptance, not rejection. “Making it what it should be,” Anderson said cryptically. I think he meant Loewe’s future.