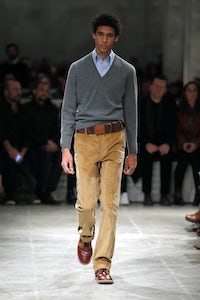 MILAN, Italy — Brown corduroy. Brown corduroy! Can you imagine a designer of international repute and unfathomable influence using such a square! idea as the foundation  of a collection which is also coincident with a major media re-positioning of their company for the future? Well, yes, if that designer is Miuccia Prada, who, in a flush of late-adult-onset empathy, is experiencing the joys of simple human normalcy.

Her men’s presentation for Autumn/Winter 2017 was a love story, as in Ali MacGraw and Ryan O’Neal in scarves and cords canoodling in the 1970 movie of the same name. “At the edge of generic,” were Miuccia’s own words to describe where she found herself with her new collection. She herself was in love with the first looks in the show: the shirt, the sweater, the pair of pants, the sheer anti-fashion-ness of it all. “Deep down in my heart, that was the point,” she said.

Simple the emotion may have been, but the motivation was complex. Miuccia was looking at a world where celebrity and money conspire to make ordinary people feel inadequate, and she wanted to mollify such feelings. It’s not people who are at fault, it’s the system. Exactly how you use fashion to express such thoughts was the challenge she set herself, and she chose to do it by elevating the ordinary, finding the hero in the everyday. “The opposite of important,” she called it.

There was, for instance, a new print process on knitwear — sweaters and socks — which looked like it might be duplicating some artist of note. But no. “Sunday artists,” said Miuccia. Ordinary guys who might display their work on the weekend in Montmartre or along the railings in Hyde Park. And these were the same guys who might wear a brown leather jacket with corduroys in a similar shade of brown or rust. Probably wearing Kickers. Resolutely average.

So this is where the strange alchemy that we know as fashion creeps into the picture. The venue for Sunday’s show was staged with beds immaculately made up with synthetic sheets and pillows. The first one we encountered on entry was red. You might imagine the accommodation in Twin Peaks’ Black Lodge offering something similar. Such a fetishised vision of domesticity hinted at a subversion of the normalcy of the clothes. So did the accessories, footwear like furry bigfoot things, and pendants, twigs and stones, pagan souvenirs plucked from the woods outside Milan.

Miuccia threw Prada’s pre-fall womenswear into the mix: Saskia de Brauw wore an angora skirt in red matched to a turquoise cardigan, also in angora. The combination, the fabrication was disturbing enough that it acted as a flagrant reminder of Westwood/McLaren’s assaults on propriety in their Sex/Seditionaries days.

And that’s how you contextualise brown corduroy. Desire is the intangible that fuels fashion. Deep down in her heart, Miuccia Prada understands that better than anyone. She proved it again on Sunday night.